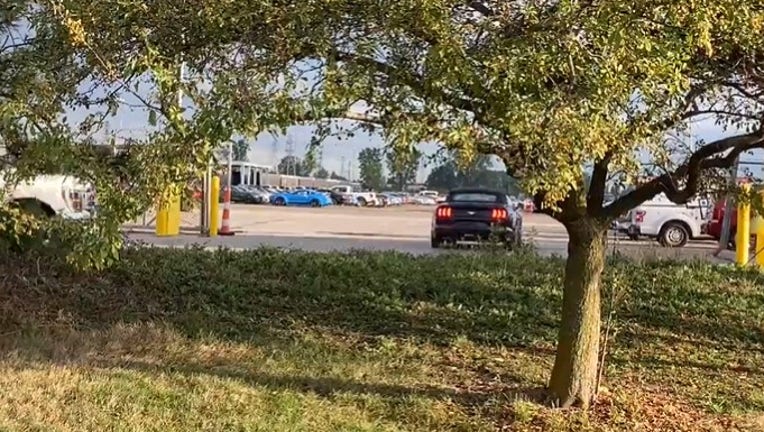 WARREN, Mich. (FOX 2) - Police in Woodhaven are searching for suspects who they say drove off in 12 to 15 new Mustangs from Ford's Flat Rock Assembly Plant.

According to police, the new Mustangs were stolen around 2 a.m.Tuesday. This is the second such theft of this kind from the Flat Rock plant.

FOX 2 has learned that police have recovered two of the mustangs.

According to FOX 2's Charlie Langton, the cars were stolen from a parking lot in Woodhaven, across the street from the Flat Rock plant.

"It's not an isolated incident. I'm sure these teams have been arranged, probably have a decent leader ship, they know what they're where they're going, they know where the easier targets are," said Woodhaven Deputy Police Chief Jeffrey Brust.

This is the second such theft of the day. On the other side of the metro, in Warren, thieves smashed through the Stellantis truck plant and stole multiple Jeep Wagoneers. Thieves were able to steal at least two SUVs that cost up to $100,000 before police caught up to them.

Car thieves are going after vehicles parked at assembly plants. On Tuesday, they hit Flat Rock Assembly Plant and the Stellantis truck plant.

"We're looking at five or six vehicles at least, and they were the high-priced Wagoneers," Dwyer said. "When the guard came out he started to close the gate, they smashed the gate and luckily he wasn't seriously injured."

Two of the SUVs were recovered but suspects got away with other the vehicles. Dwyer said these knew what they were doing.

"(They were) professionals to the extent that they know what to do and how to do it," Dwyer said.

It's not known if the thefts are connected at this time.