Anderson Lee Aldrich, appearing in court via video conference for the first time since the attack that left five dead and more than a dozen injured, answered a few questions in a barely audible voice. Video courtesy El Paso County Court via FOX.

Anderson Lee Aldrich, 22, could be seen slumped over in a chair with injuries visible on the suspect's face and head in a brief video appearance from jail. Aldrich appeared to need prompting by defense attorneys and offered a slurred response when asked to state their name by El Paso County Court Judge Charlotte Ankeny.

The suspect was beaten into submission by patrons during Saturday night's shooting at Club Q and released from the hospital Tuesday. The motive in the shooting was still under investigation, but authorities said he faces possible murder and hate crime charges. 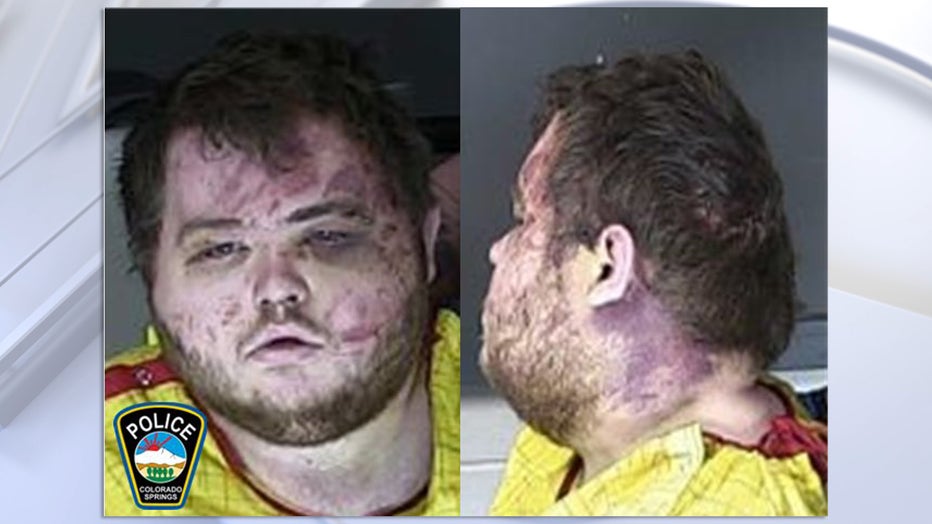 Hate crime charges would require proving that the shooter was motivated by bias, such as against the victims’ actual or perceived sexual orientation or gender identity. The charges against Aldrich are preliminary, and prosecutors have not yet filed formal charges. Aldrich is represented by Joseph Archambault, a chief trial deputy with the state public defender’s office. Lawyers from the office do not comment on cases to the media.

Prosecutor Michael Allen repeatedly referred to the suspect as "he" during a press briefing after the hearing and said the suspect's gender status would not change anything about the case in his opinion. Allen said Aldrich was "physically competent" to stand charges.

Ankeny set the next hearing for Dec. 6.

Who is Anderson Lee Aldrich? 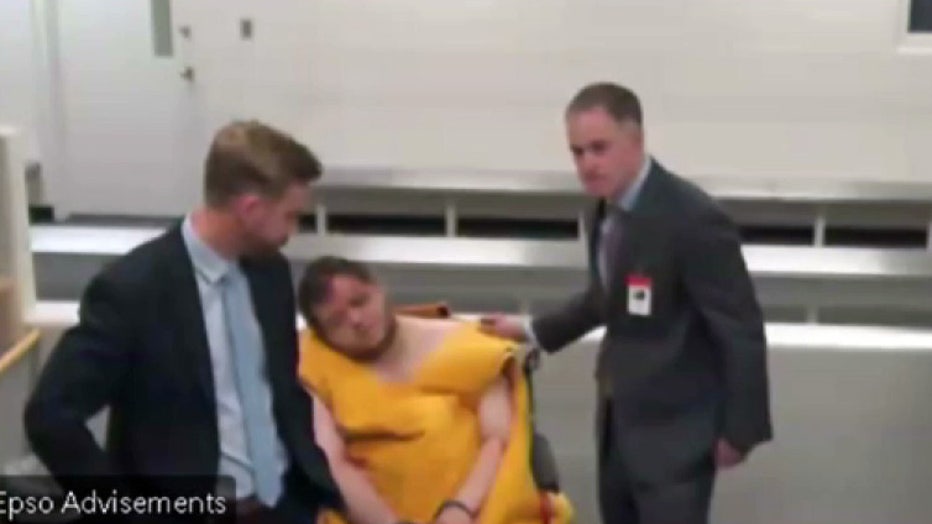 Anderson Lee Aldrich, flanked by his attorneys, appears in court via remote video.

Aldrich's name was changed more than six years ago as a teenager, after filing a legal petition in Texas seeking to "protect himself" from a father with a criminal history including domestic violence against Aldrich's mother.

Aldrich was known as Nicholas Franklin Brink until 2016. Weeks before turning 16, Aldrich successfully petitioned a Texas court for a name change, court records show. A petition for the name change was submitted on Brink's behalf by his legal guardians at the time.

"Minor wishes to protect himself and his future from any connections to birth father and his criminal history. Father has had no contact with minor for several years," said the petition filed in Bexar County, Texas.

The suspect’s father is a mixed martial arts fighter and pornography performer with an extensive criminal history, including convictions for battery against the alleged shooter’s mother, Laura Voepel, both before and after the suspect was born, state and federal court records show. A 2002 misdemeanor battery conviction in California resulted in a protective order that initially barred the father, Aaron F. Brink, from contacting the suspect or Voepel except through an attorney, but was later modified to allow monitored visits with the child.

The father also was sentenced to 2 1/2 years in custody for importation of marijuana and while on supervised release violated his conditions by testing positive for illegal steroids, according to public records. Brink could not be reached for comment.

One of the suspect’s grandfathers is Randy Voepel, an outgoing lawmaker in the California state Assembly. The suspect’s mother, Laura Voepel, identified Randy Voepel as her father on her Facebook page in a 2020 post about his time in the state Legislature. 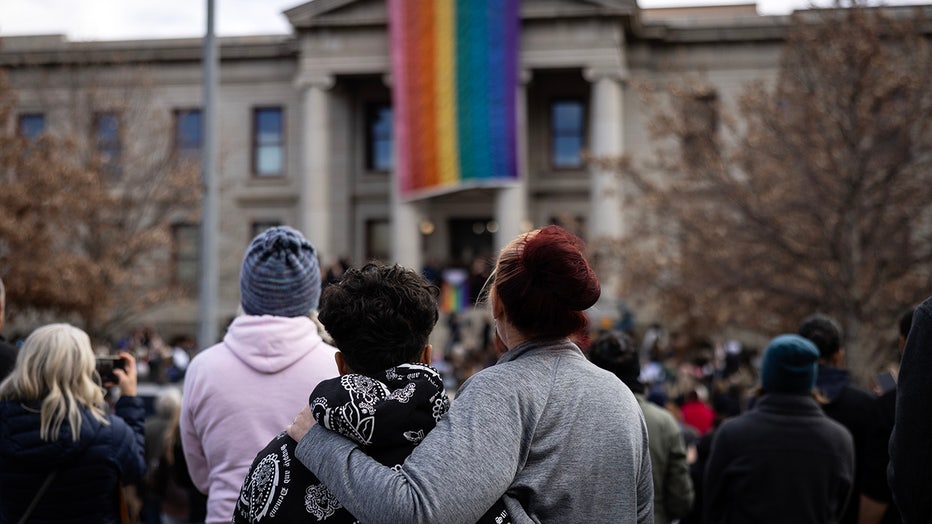 Mourners outside of the Colorado Springs City Hall where a rainbow flag was draped over the building on November 23, 2022 in Colorado Springs, Colorado. (Photo by Chet Strange/Getty Images)

Voepel, a Republican, had a mixed voting record on LGBTQ bills. He compared the Jan. 6th attack on the U.S. Capitol to the Revolutionary War, calling it the "first shots fired against tyranny." In response to criticism, he later said he didn’t "condone or support the violence and lawlessness that took place."

Aldrich's request for a name change came months after Aldrich was apparently targeted by online bullying. A website posting from June 2015 that attacked a teen named Nick Brink suggests they may have been bullied in high school. The post included photos similar to ones of the shooting suspect and ridiculed Brink over their weight, lack of money and what it said was an interest in Chinese cartoons.

Additionally, a YouTube account was opened in Brink's name that included an animation titled "Asian homosexual gets molested."

The name change and bullying were first reported by The Washington Post. 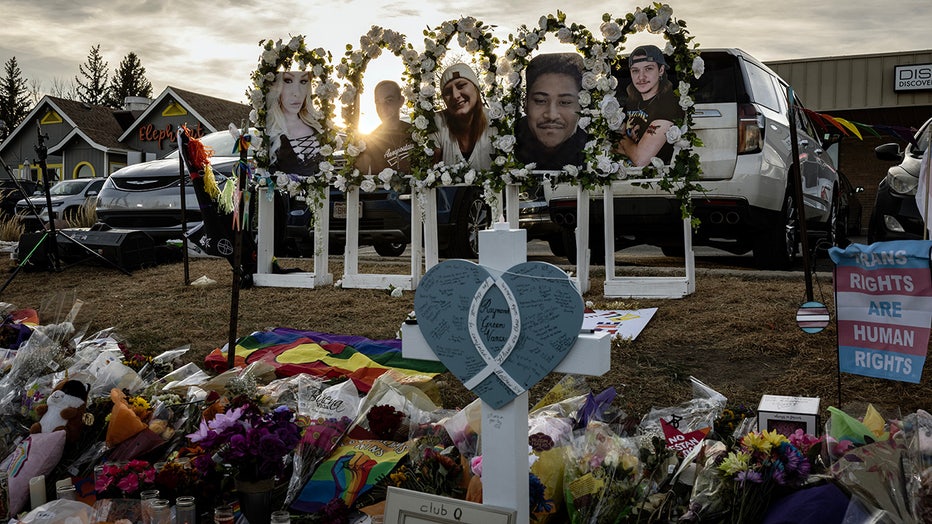 Photos of the shooting victims are displayed at a makeshift memorial outside of Club Q on November 22, 2022 in Colorado Springs, Colorado. (Photo by Chet Strange/Getty Images)

Court documents laying out Aldrich’s arrest were sealed at the request of prosecutors.

Local and federal authorities have declined to answer questions about why hate crime charges were being considered. District Attorney Michael Allen noted that the murder charges would carry the harshest penalty — life in prison — whereas bias crimes are eligible for probation. He also said it was important to show the community that bias motivated crimes are not tolerated.

Aldrich was arrested last year after their mother reported her child threatened her with a homemade bomb and other weapons. Ring doorbell video obtained by The Associated Press shows Aldrich arriving at their mother’s front door with a big black bag the day of the 2021 bomb threat, telling her the police were nearby and adding, "This is where I stand. Today I die."

Authorities at the time said no explosives were found, but gun-control advocates have asked why police didn’t use Colorado’s "red flag" laws to seize the weapons Aldrich's mother says her child had.

FOX News' Claudia Cowan spoke with LiveNOW about the man deemed a hero for tackling the shooter and stopping the rampage.

The weekend assault took place at a nightclub known as a sanctuary for the LGBTQ community in this mostly conservative city of about 480,000 about 70 miles (110 kilometers) south of Denver.

A longtime Club Q patron who was shot said the club’s reputation made it a target. In a video statement, Ed Sanders said he thought about what he would do in a mass shooting after the 2016 massacre of 49 people at the Pulse gay nightclub in Orlando, Florida.

"I think this incident underlines the fact that LGBT people need to be loved," said Sanders, 63. "I want to be resilient. I’m a survivor. I’m not going to be taken out by some sick person."

Authorities said Aldrich used a long rifle and was halted by two club patrons including Richard Fierro, who told reporters that he took a handgun from Aldrich, hit them with it and pinned them down with help from another person until police arrived. 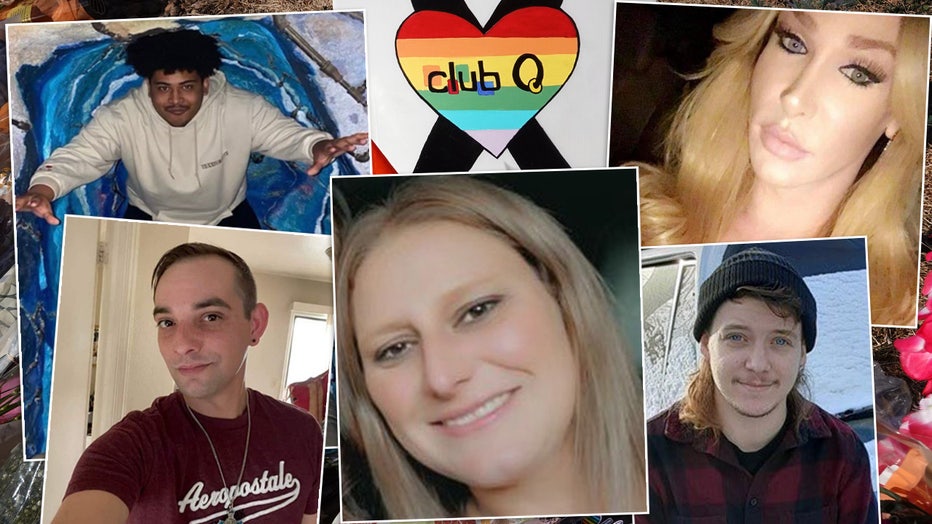 The victims were Raymond Green Vance, 22, a Colorado Springs native who was saving money to get his own apartment; Ashley Paugh, 35, a mother who helped find homes for foster children; Daniel Aston, 28, who had worked at the club as a bartender and entertainer; Kelly Loving, 40, whose sister described her as "caring and sweet"; and Derrick Rump, 38, another club bartender known for his wit.