DETROIT - During Michigan’s first big snowfall of 2020, William McKinney had staked out the same place he always did around 6 p.m., at the corner of Woodward Avenue and 8 Mile Road.

As day turned to night and the temperature dropped, a howling wind whipped up freezing rain around McKinney, who had taken a seat next to a grocery cart filled with his possessions, as well as a few tables with blankets draped over them.

For many people, work was ending. For McKinney, his work was just getting started.

"This is how we survive, this is part of our survival," he said, his voice muffled by a mask.

Within 30 minutes, at least half a dozen people had brought him food and extra layers of clothes – a good start. But what McKinney needed was money.

The longtime Detroit resident’s goal of the day, one he sets for himself every day, was getting enough money for a hotel that night. Judging by the rain turning to snow, it was going to be bitterly cold without one. 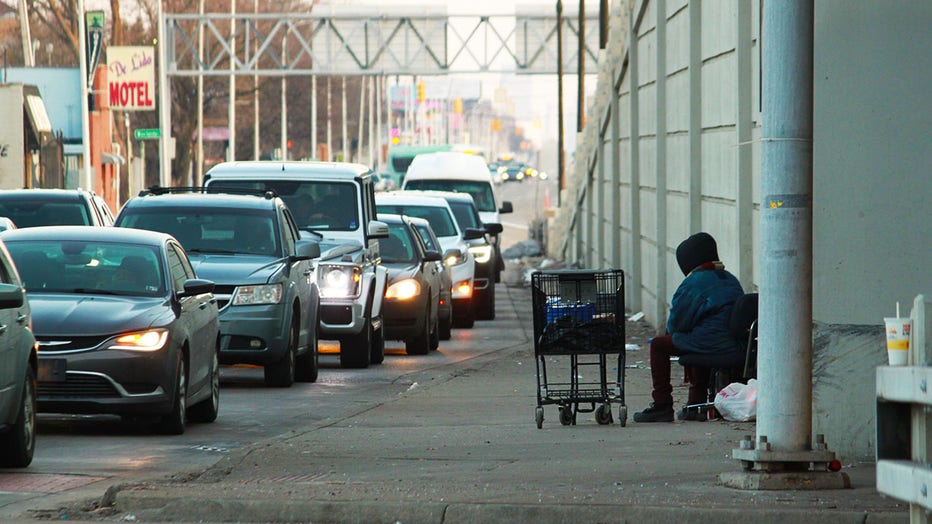 Every day for the last 10 years, McKinney has sat at one of Michigan’s most iconic intersections to panhandle. He doesn’t ask for money. People aren’t as charitable if he does, he says. But among the thousands of drivers that travel between Wayne and Oakland County every day, a select few are willing to help. It’s among the profitable places to earn money this way, public officials say.

That may be why the corners of Woodward and 8 Mile overpass have become such a popular spot for panhandling and refuge from the cold. That may also be why it has become the target of a new development project headed by the cities of Ferndale and Detroit.

The two have plans to beautify the intersection, making it more walkable and better lit for residents traveling to one of the stores nearby. But physical improvements won’t relocate the people who make money or sleep there.

That’s why both cities are extending a network of services not just to move the people out of the intersection, but back into stable housing and employment. It’s not a revolutionary solution, those behind the effort say - but it could improve upon a model they hope can be used in other cities.

McKinney used to be addicted to drugs and alcohol prior to ending up on the street. He used Detroit’s abandoned houses for shelter before one night, he says a man came up with a dog and ran him out.

He wandered north with a shopping cart carrying food and clothes when someone gave him some booze and he fell asleep.

"I woke up to cards and money and food and clothing and I’ve been here ever since." 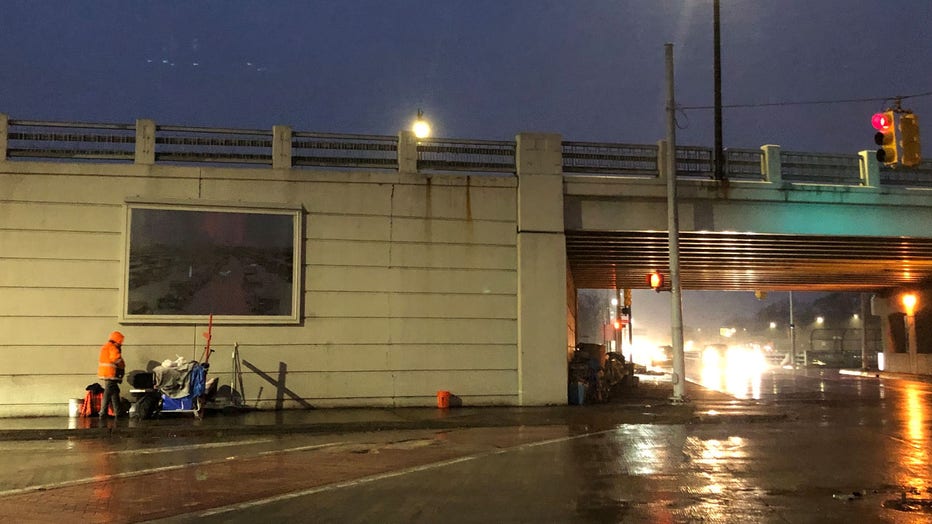 William McKinney, pictured above, says he's come to the 8 Mile Woodward intersection for the past 10 years (Photo by Jack Nissen)

The 8 Mile and Woodward intersection attracts panhandlers because of that kind of generosity, Detroit’s former Group Executive for Housing Arthur Jemison said, presenting a unique problem for cities on either side of it.

"A space like that, where people are able to get money, it’ll attract people, as hard as it is to say that," said Jemison.

And with panhandling came garbage as well. For years, the sidewalks were used as shelter and a home base for income. But it made an already busy intersection even more challenging for pedestrians to navigate between Ferndale and Detroit.

Previous efforts by both cities to clean up the intersection haven’t worked. Solving the systemic poverty now trickling onto the intersection would require more than just kicking the people off the corner. Those people would just find a different corner, or return a few days later.

In order to fix the intersection, city planners and councilmembers from both cities held a zoom call last summer to discuss ways to make it more walkable. Examples of improvements used by other cities were shown during the call.

But when Jordan Twardy, the project liaison for the two cities asked for input from the community about solutions, people instead complained about the people living underneath.

One person said they were tired of break-ins from the homeless nearby. Another didn’t like the public urination that took place in the area. One woman said that people staying at the intersection had walked into her backyard and started having sex.

Gail Marlow, a poverty advocate and the head of Motor City Mitten Mission, was on the call that day. She was also disappointed with what she was hearing, later recalling the meeting being "frustrating on a lot of levels."

"It was more about creating a beautiful space in that area. It’s going to take a lot of work to humanely move these people. There wasn’t really too much discussion until the comment section came up."

The State of Homelessness

The issues Ferndale and Detroit were hoping to fix means tackling the same ones that have plagued large cities for decades. Redoing the 8 Mile-Woodward intersection doesn’t just mean rehabbing the roads, decorating the walls with murals, and installing new LED lights.

For poverty experts, it means tackling the systemic issue of homelessness and addressing the reasons panhandlers in the area struggle to find other income sources. They may need help for kicking an addiction or assistance finding a job. They might struggle with mental health and don’t know where to go for support.

The state’s most recent report on homelessness found 61,832 individuals struggled with housing in 2019. Almost half of them were families with children. About 26% of them were from the tri-county area and 44% had either a physical or mental disability.

"You can’t just grab somebody, flip a switch and say ’cool, you’re going to be in housing now’," Marlow said. "Do this with these folks, not to them."

And that’s not easy when many of them don’t trust the people trying to help.

"There are different reasons they might resist leaving, whether it be mental health, substance abuse, or housing," said Ryan Hertz, of the nonprofit group Lighthouse.

RELATED: 43% of Michiganders are too poor to afford basic living costs, a state poverty report found

Pulling someone out of homelessness requires a case-by-case approach since everyone’s needs are different.

Both Hertz and Marlow said they’ve been in touch with Twardy and the 8 Mile Boulevard Association, which is coordinating the project, about how to best address the needs of those that use the intersection. In February, everyone got their first look at what the solutions will be.

The Continuum of Care

A street outreach team contracted through the city of Detroit’s Homeless Solutions Division will have their sole focus placed on the people who use the intersection. Weekly visits from four-to-five caseworkers will build up trust with their clients.

They’ll identify the services each person needs, then connect them with organizations that can supply help. In previous efforts, different outreach teams offered help depending on the service. But this made communication and follow-up difficult.

In the past, these efforts weren’t as coordinated as they needed to be, Terra Linzner, the Homeless Solutions Director said.

"This (new) approach is geared toward longer-term engagement, so we can understand the needs of these people and address them in a comprehensive way," she said.

This tweak in protocol isn’t revolutionary, the acting director of the Housing and Revitalization Department said.

"I don’t want to say we haven’t been coordinated in the past, but it’s not been as intentional as we’re making it with 8 Mile and Woodward," said Julie Schneider. 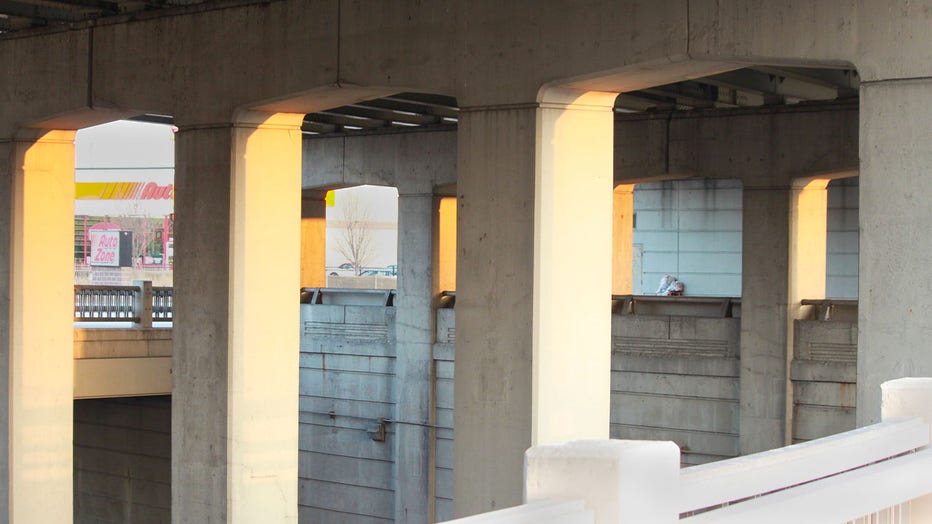 About 26% of all homeless individuals in Michigan are in Wayne, Oakland, or Macomb County (Photo by Jack Nissen)

The caseworkers checking in will have experienced housing instability in the past, making them better suited for providing outreach and building trust. It’s important for relationship-building, Linzner said.

Once trust is built, those caseworkers will have a better understanding of the barriers keeping clients from progressing. It can be vital documents for securing a driver’s license. It could be securing housing with subsidized rent. If they need help addressing mental or physical disabilities, there are services they can connect them with.

Using the city’s continuum of care network, the caseworkers will reach out to whatever service is needed.

The city will also help their clients raise money through the website Handup, which works as a GoFundMe for people who can explain their story, tell people what they need, and raise money to purchase it. Ferndale has already put up $5,000 to get things started.

Both Detroit and Ferndale are also working on a data-sharing agreement that will allow the two cities to better communicate with each other about necessary funds or resources either need or have.

So far, three people have already been housed through the Community Housing Network and one person has been connected to behavioral and physical health services as a result.

"Our hope is to use this model of both human services and physical improvements to provide lasting and positive change along the Corridor," Patty Rudd, operations manager at the Eight Mile Boulevard Association said in a statement.

"We got some points on the board, some wins on the way," said Twardy during the February meeting.

Noah Stephens, who grew up in Highland Park remembers riding his bike over 8 Mile in the early 90s. He used to take it out to a bookstore in Ferndale.

"I never went under the bridge," he said. "I never considered it a viable passageway. The fact I can't recall using it probably says a lot."

Now, Stephens and his firm the People of Detroit will have the opportunity to redo the intersection. Their proposal was selected to do the redesign. For him, repairing the intersection will mean restoring it to its intended use that makes movement between Woodward and 8 Mile Road easier.

It’ll require a balance of expertise and input from the community, both of which often get sidelined in the design and implementation of an urban remodel project.

"There’s a lot of stakeholders, a lot of interest and that needs to be considered and that will go into the final design," he said.

During July 2020’s virtual meeting, a PowerPoint showed examples of graffiti-esc murals, vibrant colors, and plenty of space for pedestrians to walk on - components that 8 Mile and Woodward lack.

A rendering of what Stephens comes up with will be delivered to stakeholders in April. Because of the bridge’s landmark designation, the Michigan Department of Transportation has been engaged in the design as well - making sure no inappropriate adjustments are made.

Twardy says the plan is for physical improvements to be installed by the fall of 2021. Meanwhile, the human services investment will extend into 2022. Detroit will be using part of $220,000 from an emergency solutions grant and additional funds from the CARES Act at 8 Mile and Woodward, while Ferndale will put up $105,000 as initial funding. 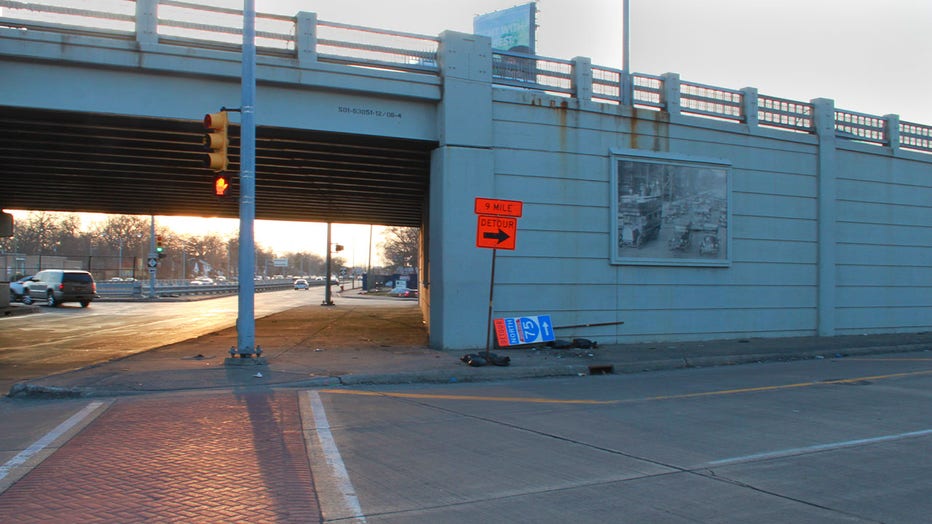 If someone new shows up at the intersection, then the case management outreach team will venture out to start the process all over again.

"We hope that we have success with this program, that it becomes a model that can be used elsewhere to serve people and provide them adequate and safe housing," said Linzner.

On top of all of that, an informal deal between both cities and MDOT to keep the intersection clean will be finalized into a formal agreement for continued maintenance of the area.

This isn’t a cure to homelessness, Twardy says. But he does hope with a year of funding locked in, the cities can develop a template that can be replicated when they or other cities target their sources of homelessness.

"We don’t want to recreate something that has to be sustained, so what we’re trying to do is put together resources and plan for a year’s worth of services that can be replicated or expanded," he said. "It can be used to power an existing ecosystem, a runway to engage folks while we do the physical improvements."