MAYFIELD TWP., Mich. - One man has died and another is hospitalized after the vehicle both were traveling in crashed into a tree after the driver lost control. 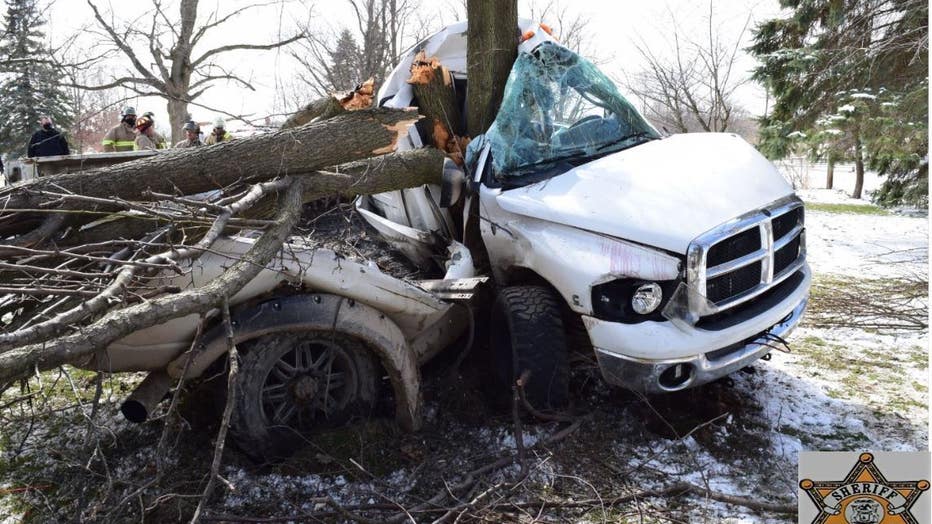 The pickup lost control, struck a mailbox before the driver overcorrected and drove the truck off the road. The impact killed the passenger.  (Lapeer County Sheriff's Office)

Police at the scene found two occupants non-responsive within the pickup truck around 2:25 p.m.

A preliminary investigation found that the vehicle, a 2003 Dodge pickup truck had first left the road while driving east on Haines Road. The truck struck a mailbox and traveled on the shoulder for a distance before the driver overcorrected.

The vehicle made an abrupt turn left and went over both the east and west lanes of Haines Road. By the time it went over the pavement, it had turned sideways and eventually struck a tree.

A release from the Lapeer County Sheriff's Office said the tree "intruded" into the front half of the truck by several feet.

The fire department was able to pull a 40-year-old man from the driver's seat. He was taken to McLaren Hospital in Lapeer and is listed in stable condition.

The man in the passenger seat, identified as 37-year-old Rick Trott from North Branch, was pronounced dead at the scene.

Police shut down the roadway for three hours as first responders deployed rescue and investigative operations.

It's unclear if speed or alcohol was a factor in the crash.

Anyone with information is requested to contact Detective Sgt. Jason Parks at jparks@lapeercounty.org or 810-656-1015.