(FOX 2) - Researchers investigating solutions to the country's problems of forever chemicals have set their sights on a bold objective: Total destruction.

A physics professor at Michigan State University is exploring ways of using plasma - a fourth state of matter made up of ions and electrons - to "permanently destroy" PFAS, as he puts it. Per and Poly-Fluoroalkyl Substances are among the most persistent contaminants in the world.

The science behind the process is in the early stages of development. But Dr. Qi Hua Fan, the project director who runs the PFAS research lab at MSU, says the new technology has the ability to completely eliminate the substance without generating waste that usually follows other treatment efforts.

"There's never going to be a single solution. (Plasma) will also be part of a larger system," Fan said. "But this is really cost-effective. It's very simple."

There may only be few steps when it comes to using plasma to remove PFAS, but the science around the method can get complicated fast.

Despite PFAS being detected across the world, its removal continues to stymie scientists. Even the EPA says researchers still don't understand the best way to detect and remove it from the environment. That includes removing it from drinking water, air, soil, and people.

Of the 2,854 sites that PFAS has been detected in, approximately 200 of them are in Michigan - one of the highest concentrations in the country.

Standing in the way of most efforts to remove PFAS from the environment is the chemical bond that makes up the contaminant. It's incredibly sturdy. Most methods that researchers use when removing PFAS struggle to break up the bond.

READ MORE: Why dogs can remember their favorite toys

The most common methods include removing the contaminant with a filter or purifying the water. But these systems are inefficient, Fan says. They also create wastewater that still has highly concentrated levels of PFAS in it, which eventually gets stored in landfills and other industrial sites. There, they further contaminate the nearby environment as leachate - the rainwater that mixes in with buried waste before it drains into the ground.

Now, with the help of a $690,000 grant through the Great Lakes Protection Fund, Fan hopes to test a new plasma technology. Not only is it capable of completely destroying PFAS, but it does it faster than conventional methods and with less waste.

The secret is extremely high temperatures.

Fan has already tested the new method against older techniques. It's called MEAP (magnetically enhanced arc plasma) and involves an atmospheric plasma, in which the temperature of the electrons are ~30,000 degrees Celsius. Beneath the plasma is PFAS-contaminated water. While concentrated, PFAS is then transported by a gas into the plasma, which is hot enough to tear apart the bonds. 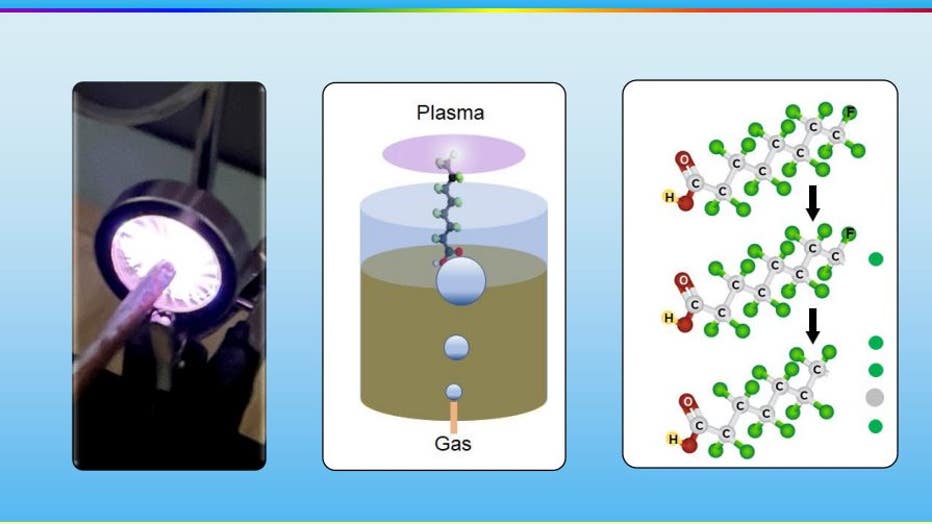 Magnetically Enhanced Arc Plasma uses a plasma vortex that covers a wide area of water surface. Gas bubbles transport the PFAS in the water into the plasma, where it breaks it up. Graphic courtesy of Dr. Qi Hua Fan.

READ NEXT: A 3D-printed ear could be a game-changer for organ transplants

The technology does have a drawback. It requires a lot of energy to power. And previous techniques using plasma have resulted in shorter strains of PFAS being created.

Fan says the hope is the technology could be adopted anywhere. It has the capacity to treat thousands of gallons of contaminated water every day, making it effective for managing wastewater.

"This is one perfect example of how (technology) can have a positive societal impact across other industries," said Russell Zarras, the lead business developer with Fraunhofer, a research and development firm that's partnered with MSU on the project.

Fan, MSU, and Fraunhofer all envision both waste management companies and cities that deal with people's wastewater using the technology.