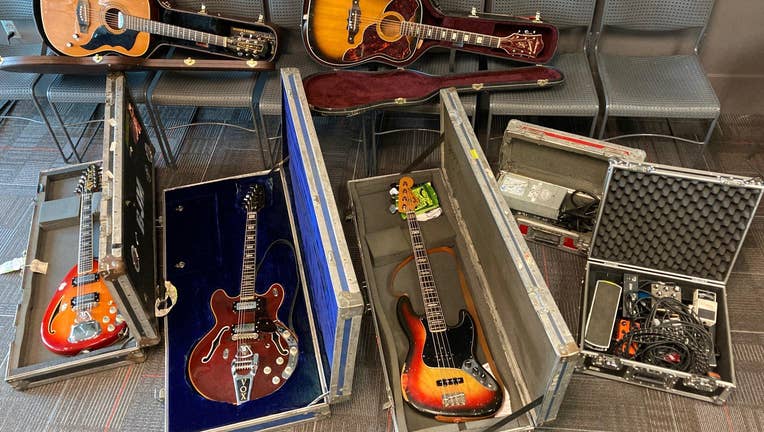 Officers said they were abating a camp last Thursday near Interstate 405 when they recovered five out of six guitars reported stolen from The Brian Jonestown Massacre band on April 18.

"These guitars are reportedly from the 1960’s and have enormous sentimental value and are not easily replaceable, according to members of the band," police said in a news release.

"I want to thank you for your service and the excellent detective work in locating most of our guitars. I also want to thank every single person that reached out or spread the word about the robbery - thank you all," band member Anton Newcombe tweeted.

RELATED: Guitar stolen from Grammy-nominated musician: ‘It is part of my life'

According to KATU, the band was in town to perform at the Roseland Theater on April 19 when the theft occurred.

Officers also found a stolen Subaru, suspected Fentanyl pills and drug paraphernalia, damaged car parts, including a catalytic converter, and other brand-new property suspected of being associated with thefts or burglaries. They also spotted a large litter of 3-week-old puppies with the owner. Authorities said the puppies were being well-cared for, and the owner had a plan to take them to another location.