FARMINGTON HILLS, Mich. (FOX 2) - A Farmington Hills woman said someone tossed a bottle filled with urine and the message 'Trump 2020' and then threw it at her house because of her signs supporting Joe Biden and the Black Lives Matter movement.

Trisha Beauchesne said she found the Gatorade bottle in her driveway but it wasn't a thirst quencher inside. She even had someone smell it to confirm it was urine.

A Farmington Hills woman says earlier this summer someone spray painted her yard signs. Now, someone threw a bottle full of urine at her house with a message.

According to Trisha, this isn't the first time her home has been targeted recently. She has several signs in her yard in support of racial equity and the Black Lives Matter movement. In July, one of those signs was vandalized.

"He spray-painted my BLM sign that has the MLK quote on it that 'silence is betrayal'," Trisha said.

That vandalism happened at 2:30 in the afternoon and a neighbor saw a man in a baseball hat get out of a small black car and spray paint the sign.

She posted about it on Nextdoor to alert her neighbors and it turns out she wasn't alone. Another neighbor had spotted a man spray-painting 'fund police' on political signs at Drake and 13 Mile and 14 Mile. That neighbor said he reported it to the police as well and it's not known if it's the same person who trashed her sign.

Regardless, she wasn't taking her signs down and even put more up in support of Sen. Gary Peters and Joe Biden.

Last Friday she was working in her yard when someone tossed the urine-filled bottle on her driveway. Again, she posted on Nextdoor and says her next step is to call Farmington Hills Police. 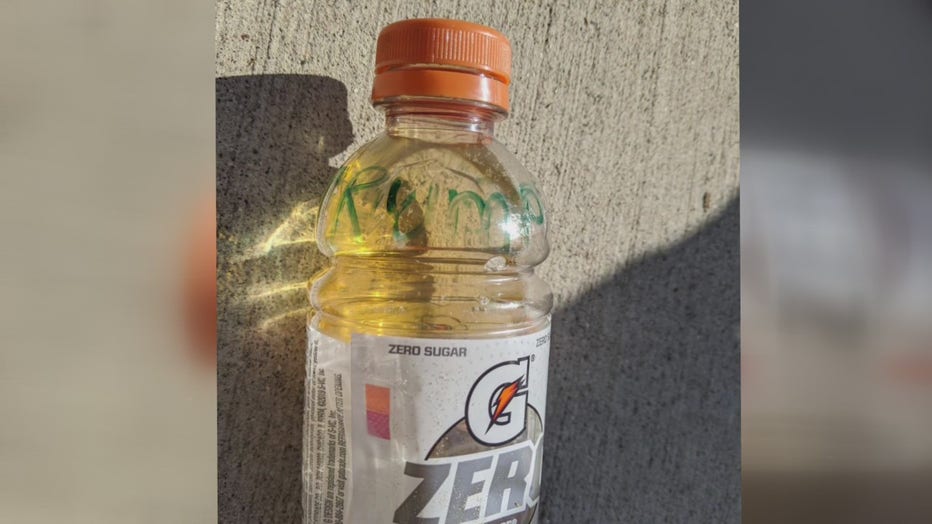 "I think the neighbors need to be aware there are these people out there. Watch, be vigilant, this might happen to you and I don't want that," Trisha said.

Instead, she wants neighbors to have a dialogue.

Farmington Hills Police say they take these acts seriously and will investigate.