TRAVERSE CITY, Mich. - The interior least tern, a hardy Midwestern bird that survived a craze for its plumage and dam-building that destroyed much of its habitat, has soared off the endangered species list.

Federal officials said Tuesday that 35 years of legal protection and habitat restoration efforts had brought the tern back from the brink of extinction.

The smallest members of the tern family, they feed mostly on small fish and build nests on the ground. While most least terns are considered seabirds, some species live by rivers, lakes and wetlands. 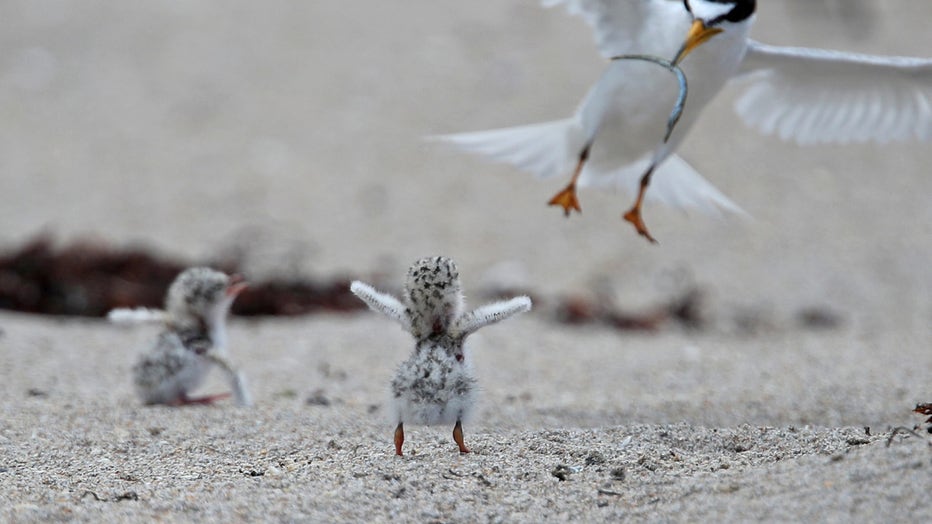 Baby least terns wait for food near their nest in Deerfield Beach on Wednesday, July 15, 2020. A large section of the beach has been closed off due to the formation of a colony by the seabirds. (John McCall/Sun Sentinel/Tribune News Service via Getty

Their most important nesting areas are along more than 2,800 miles (4,500 kilometers) of river channels in the Great Plains and the Lower Mississippi Valley. They migrate to the Caribbean and South America for the winter.

Their numbers plummeted in the late 19th and early 20th centuries when their feathers became a popular feature of women's hats.

Then came a wave of dam and levee construction and other engineering measures to control Middle America's great rivers -- particularly the Missouri and the Mississippi. Those structures wiped out much of the bird's shoreline habitat.

When listed as endangered in 1985 as a distinct population segment, fewer than 2,000 interior least terns remained, along with a few dozen nesting sites.

The Army Corps of Engineers played a key role in the bird's recovery, changing river management strategies and placing dredged material to create new nesting and dwelling spots for terns and other imperiled shorebirds such as the piping plover.

The steps paid off. The interior least tern's population is now estimated at more than 18,000, with about 480 nesting sites available in 18 states.

The Endangered Species Act requires the Fish and Wildlife Service to monitor the tern for at least five years to make sure its numbers remain stable.

The engineering changes have drawn criticism and legal action from some Missouri River farmers, who contend they have worsened flooding since the mid-2000s.

But the Army Corps says it will continue conservation and monitoring efforts in an area affecting about 80% of the tern's breeding population. 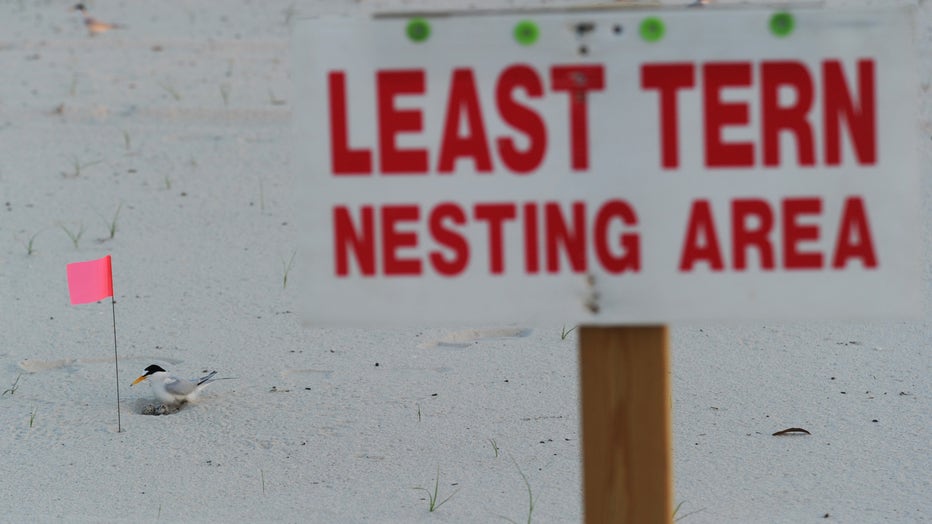 A least tern prepares to sit in its nest with two eggs May 5, 2010 along the beach in Biloxi, Mississippi, near a sign marking the area . The least tern is in its nesting season in one of the largest colonies on the Gulf Coast and is in the path of t

Its partnership with other agencies and nonprofits has shown that "we can protect and recover an endangered species while continuing to provide critical navigation and flood control benefits to the nation," said Major General Diana Holland, Commander of the Mississippi Valley Division of the Corps.

The Corps and the Fish and Wildlife Service teamed with the American Bird Conservancy to develop a computer modeling system to track the bird's status with and without continued management in certain areas.

Environmental groups that sometimes have opposed dropping species from the endangered list supported the removal of the interior least tern.

"We consider it an Endangered Species Act success story for sure," said Noah Greenwald of the Center for Biological Diversity.

But he cautioned that vigilance was needed to make sure the bird's river habitat remains secure.

"Scientists are warning that we're in danger of losing 1 million species to extinction," Greenwald said. "Efforts to manage rivers in a more natural way are the kinds of things we need to do to avoid the extinction crisis."