It starts with chanting, a distant drumbeat, and the constant whir of a police siren. The squad car in the video had been moving forward when one of the dozens of protesters surrounding the vehicle laid on the hood. As the camera rotates around the crowd and the protester hops on the vehicle hood, its wheels begin to spin faster - accelerating in bursts.

More people begin to shriek as about 10 demonstrators and the person holding the camera find themselves at the mercy of an accelerating police car. Several individuals appear to be flung to the sides of the moving squad car; one protester is on the ground next to its wheels while three more are on still on the hood. The officer accelerates again, forcing two of the three protesters off the hood.

One more acceleration happens, this time it carries the person hanging on for about 20 feet before they roll off the hood. People scream and give chase as the vehicle drives away.

Racial unrest and citywide protests have been peaceful in Detroit, DPD Chief James Craig has boasted, attributing the fall in property crimes to a lack of violence during the gatherings which have swept through America's urban centers. That wasn't necessarily the case Sunday night when a Detroit protest turned violent, as showcased in a 27-second clip now posted to Facebook.

Detroit Police are investigating a scene that took place Sunday night after cell phone footage revealed a squad car speeding through a congregation of demonstrators. People are seen being flung from the hood as the vehicle accelerates away

Detroit Police spokesperson Sgt. Nicole Kirkwood told the Detroit Free Press last night the department is investigating the incident and said the rear window of the police vehicle had been smashed in.

Even as the size of the protests in Detroit has declined in recent days, hundreds of people were still spotted gathering to demonstrate last night. As the rally traveled down Vernor Highway, police watched from a safe distance. The clash between protesters occurred when demonstrators had turned around and were walking back.

The first few days of protests in Detroit were tense. Starting up as the sun would set, demonstrators and law enforcement armed in tactical gear would clash downtown and on the outskirts of the city center. Protesters would later claim police deployed excessive force, arguing that tear gas and rubber bullets injured people. Chief Craig says officers had projectiles thrown at them, eventually leaving one with a concussion.

Since then, more peaceful displays of protest have been led. Organizers with Detroit Will Breathe, the group spearheading many of the protests have met with police and held public tribunals where they put high brass of Detroit government on trial.

What will come of the 2020 Woodward Dream Cruise, the country's most famous mobile classic car show? COVID-19 has canceled every other mass event scheduled for the summer - but the weekend driving show is different. It runs through nine different cities but primarily takes place on the road connecting all of them together.

All of the adjacent community events that take place in conjunction with the cruise won't be on, but what about the cars that show up on Woodward Avenue? The whole event draws up to 2 million people a year, so how many will come if classic-era cars take to the streets with none of the fanfare? And if the rest of the show is canceled, how does it get enforced?

These are the agonizing decisions the Woodward Dream Cruise Committee will have to consider Monday as a decision is expected later today. Several business owners with property along the avenue have been asked to not rent out space for parking this year, the Detroit News reports. But would that dampen turnout anyways?

The events outside location and decentralized planning make it a coronavirus wildcard.

At least in Detroit, residents can anticipate at least one of their favorite things about city living returning to the daily flow: parking enforcement. That's right, a return to normalcy means parking rates, and the subsequent ticket for not paying the rates, is returning to Detroit after a months-long hiatus.

Code enforcement that monitors improper use of private property in the city is also returning as employees from the Buildings, Safety Engineering and Environmental Department (BSEED) start work June 29.

"As we get back in line, it is going to mean enforcing our ordinances," said Major Mike Duggan during a Thursday press conference.

For anyone with cars parked on their yard, lawns with grass growing out of compliance, putting out yard waste on the wrong days, or other infractions as it relates to city code, citations will start being handed out Monday.

It'll be a dry weather-week in Metro Detroit, with temperatures climbing into the 80's and 90's.

Dry weather reigns this week! Rain likely stays away through the holiday weekend.

Mississippi lawmakers voted Sunday to surrender the Confederate battle emblem from the state flag more than a century after white supremacist legislators adopted the design a generation after the South lost the Civil War.

Spectators in the Capitol cheered and applauded after the votes in the House and Senate.

Each chamber had broad bipartisan support for the historic decision. Republican Gov. Tate Reeves has said he will sign the bill, and the state flag will lose its official status as soon as he does. That could happen in the next few days. 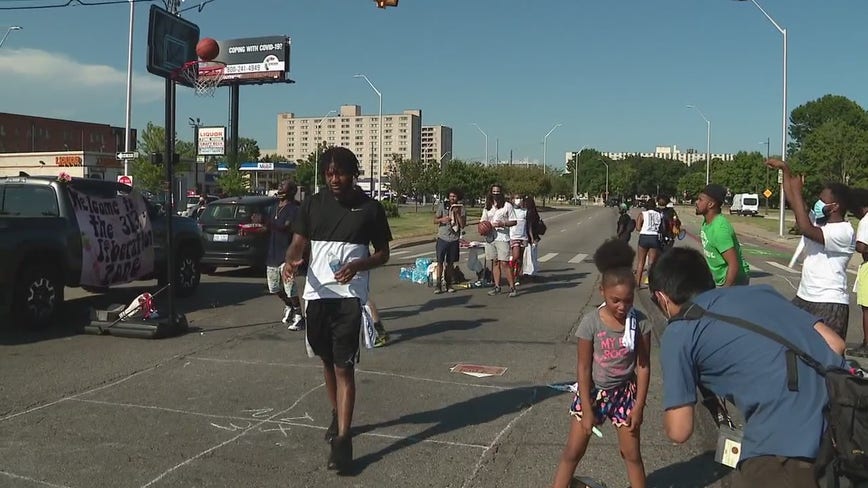