DETROIT (FOX 2) - The footage couldn't be any clearer.

On Sept. 28, surveillance footage reveals a carefully calculated plan by three men to rob two people of their car.

Police looking for three suspects in late-night carjacking in Plymouth

Police have released security footage of a late-night carjacking that happened in Plymouth on Sept. 28. The footage reveals a pretty clear depiction of suspects lying in wait in a silver Ford Taurus, waiting for the owner of another car to come out of a Valero gas station located at the 13500 Block of Plymouth Road. The carjacking happened at 2:55 a.m., when one suspect holds the victim at gunpoint, while another suspect robs them of their possessions. If anyone has information on these three, they're asked to call Crime Stoppers or Commerical Auto Theft.

At 2:55 a.m. at the Valero gas station at the 13500 Block of Plymouth Road, three men lie in wait in a silver Ford Taurus. They're parked next to a black Nissan - waiting for their targets, the owners of the sedan.

As soon as the two customers exit the gas station, they make their move.

The driver of the first car exits the Ford Taurus and points his gun at one of the victims, who raises his hands and slowly backs away. The second person also has a gun pointed at them. She moves beside the car, keeping her hands up as well.

Then two more men get out of the Taurus, with hoodies covering their faces. They pat down one victim and pull out items of their pocket.

At the same time, another partner in crime appears to snatch food out of the hand of a second victim. 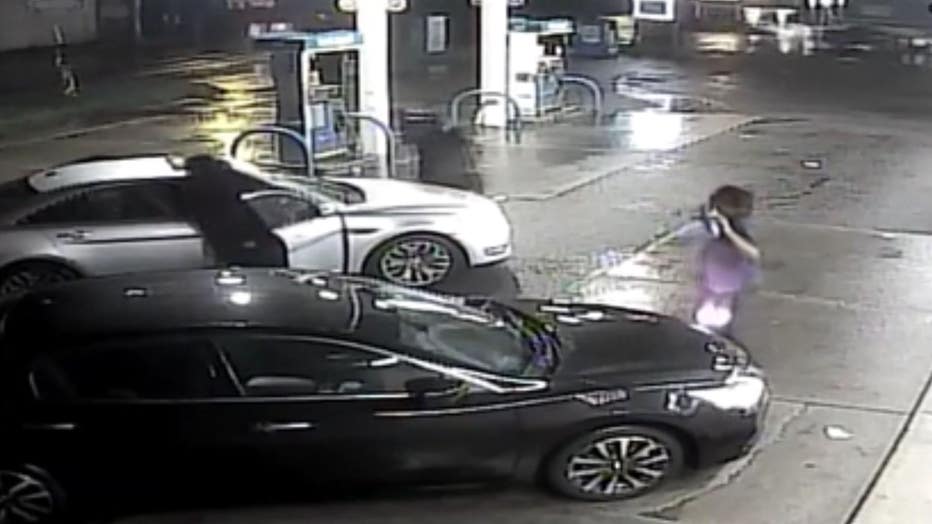 One suspect gets behind the wheel of the Black Nissan, while the other two climb back into the Taurus and they all drive off. The entire incident only takes about 45 seconds.

Police aren't aware of any carjackings happening at the gas station, but they would like to catch the three before they strike again. That's where they're asking the help of residents. The three suspects are described as: