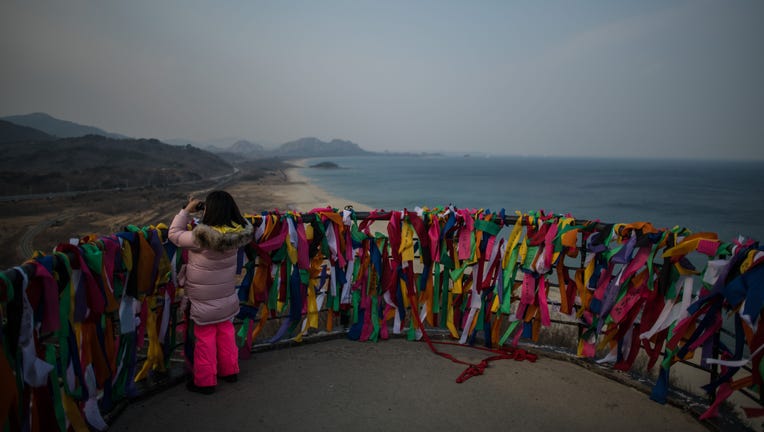 A little girl looks through binoculars towards North Korea from a viewing platform covered with ribbons bearing goodwill messages during a visit to Goseong Unification Observatory on February 22, 2018 in Goseong-gun, South Korea. (Photo by Carl Court

SEOUL, South Korea - South Korea’s new government on Thursday proposed a meeting with North Korea to discuss a resumption of reunions of families separated since the 1950-53 Korean War, despite long-strained ties between the rivals over the North’s nuclear weapons program.

Family reunions are a highly emotional humanitarian issue because they involve people in their 80s and older who are desperate to see their long-lost relatives before they die. But North Korea, which often uses such reunions as a bargaining chip in dealings with South Korea, is unlikely to accept the offer because it has steadfastly rebuffed Seoul’s and Washington’s offers to resume talks on its nuclear program and other issues while focusing instead on developing its weapons technology.

"The South and the North should confront the painful parts of the reality. We must solve the matter before the term ‘separated families’ disappears," Unification Minister Kwon Youngse said in a televised briefing. "We hope that responsible officials of the two sides will meet in person as soon as possible for a candid discussion."

South Korea later tried several times to send a message about the dialogue offer via a cross-border communication channel, but North Korea didn't accept the messages, according to the Unification Ministry, which is responsible for relations between the two countries.

The South Korean overture came two days before Chuseok, the Thanksgiving holiday celebrated in both Koreas.

Exchange programs between the Koreas have remained stalled since the 2019 collapse of broader U.S.-led diplomacy aimed at convincing North Korea to give up its nuclear program in return for economic and political benefits. Washington has urged North Korea to return to talks without any conditions, but the North has said it won’t do so unless the United States first drops its hostile policies toward it.

Since taking office in May, South Korea’s new conservative government led by President Yoon Suk Yeol has offered a massive support plan in return for denuclearization but impoverished North Korea has bluntly rejected it. Yoon has also offered the shipment of COVID-19 relief items, but North Korea has ignored them as well. Last month, North Korea blamed its recent COVID-19 outbreak on balloons flown from South Korea containing propaganda materials and warned of deadly retaliation.

North Korea is also continuing more than 2 1/2 years of pandemic-related border shutdowns, another possible obstacle for the revival of family reunions.

Some observers say South Korea may try to use talks on family reunions as a way to find a breakthrough in ties with North Korea. Kwon told reporters that he thinks an offer of dialogue for family reunions can help resolve other issues.

Since the Korean War ended in an armistice, not a peace treaty, the two Koreas have banned millions of people split by the war from visiting their relatives across the world’s most heavily fortified border. Decades later, most have had no word on whether their loved ones are still alive.

The Koreas have occasionally allowed separated families to meet temporarily, but such reunions haven't happened since 2018. According to the Unification Ministry, about 133,650 people in South Korea have applied for reunions but nearly 70% of them have died.

During past reunions, participants were typically given three days to meet their relatives and none was given a chance to see them again. Those reunions brought together parents and children, brothers and sisters and others who sobbed, hugged and asked each other about their lives.

South Korea uses a computerized lottery system to pick participants. Observers say North Korea chooses citizens loyal to its authoritarian government and is reluctant to expand reunions because it worries its citizens’ contacts with more affluent South Koreans could weaken its rule.