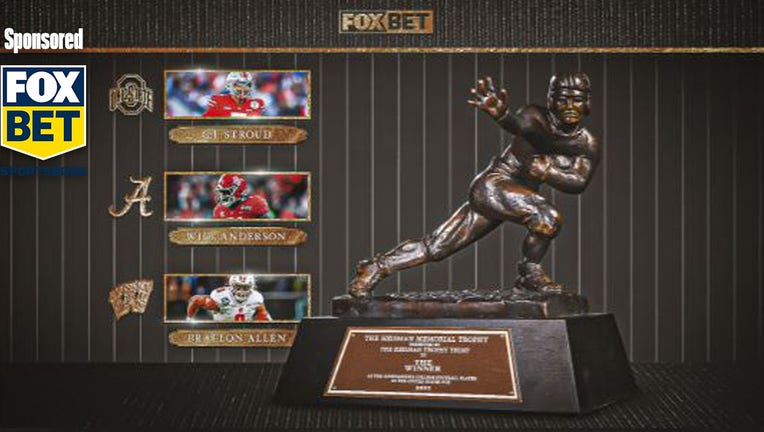 FOX Sports analyst Geoff Schwartz breaks down the three players he thinks you should bet on right now to win next season's Heisman. (FOX Sports)

I'm shouting from the rooftops once again that college football season is basically here, guys. Conference media days have started, and camp will be here before you know it.

The start of a new season means we get to anticipate who the best players might be, and we can start looking at which studs will give us the most bang for our bet slips.

A couple of notes before we get going. There has not been a back-to-back Heisman winner since Ohio State running back Archie Griffin won this award in 1974 and 1975. So while Alabama quarterback Bryce Young has the second-best odds to win this award for the second consecutive season, I will not include him in my wagers for this reason. Voters have shown they like "new" players winning this award.

Here's the second thing. No player west of the Rockies can be included. Sorry to my Pac-12 fam, but there just aren’t great options outside Caleb Williams. And from experience, no one is winning out West unless they are on a dynasty squad. Even with the addition of Williams, USC is not that squad right now.

Finally, I do not like wagering on long shots just because they have value. Value isn’t just about throwing money on long odds because of the big "what ifs." You know the ones I'm talking about. "It might hit if this random thing happens. Oh, and plus this weird thing has to happen. Don't forget, this other odd thing also has to happen!" And so on and so forth. It's about finding guys who are in great spots with good odds.

A couple of long shots who won the Heisman that come to mind are WR DeVonta Smith and QB Lamar Jackson. Both had the longest odds ever prior to Week 2, at +10000, per FOX Sports research.

With all of that out of the way, let's jump into my three early Heisman picks, with all odds via FOX Bet.

The Ohio State quarterback is the favorite to win the award for good reason. In his first season as a starting quarterback, he threw for 4,435 yards while completing 71.9% of his passes. Stroud's adjusted yards per attempt was over 11, and he threw 44 touchdowns with only six interceptions.

Ohio State and its wide receiver group have a big-play offense, and C.J. leading this unit will be better in his second season as a starter. It would not surprise me if Stroud threw for nearly 5,000 yards and 50 touchdowns.

Remember, he didn’t play against Akron last season because Ohio State wanted to get young guys some reps. A full 13 games could get C.J. those numbers and a shiny Heisman.

Call me crazy, but Alabama's Will Anderson was the best player in college football last season. And if Anderson had been draft-eligible, he would've been the first pick in the NFL Draft. Even so, it will be an uphill climb for him to win this award, as no defensive player has won this award since Charles Woodson in 1997.

Anderson does have a few things working in his favor, though. He has preseason hype, which is very important for a player's image heading into the season. Anderson will be mentioned in every article, highlight package and preseason preview as a Heisman favorite. And rightfully so. He earned this praise with his 17.5 sacks and 34.5 tackles for loss in the toughest conference in the sport last year.

Another thing that he has going for him is he starts for a squad that has half of its games nationally televised, as they are a team that will be competing for a national championship. Eyeballs will be glued to this kid's play.

Let's also acknowledge there currently isn't a strong quarterback field to consider when it comes to the Heisman. It's hard — virtually impossible — for a defensive guy to grab the award, but Bama's Anderson could change that tide later this year when December rolls around.

The Wisconsin running back totaled 1,268 yards on 6.8 yards per carry last season as a 17- year-old true freshman. Allen totaled these yards in only 183 carries. Beyond impressive.

Entering his second season, Allen should get the bulk of the carries on this Badgers squad. For reference, Jonathan Taylor had 320 attempts in Wisconsin’s last full season, which leads me to believe Allen should rack up more than 2,000 yards this season. And if he does have a 2,000-yard year, that performance will get him noticed.

Braelon having a great season carrying the rock would be only half the battle. The Badgers would also need to have a magical season for Allen to get himself to New York. If Wisconsin can make a run, look out. At these odds, he is worth a sprinkle.