The second game was tied at 3 after seven innings, and the Twins went in front when pinch-runner Nick Gordon scored on a wild pitch by Joe Jiménez (3-1) in the eighth.

But the Tigers rallied in the bottom half. Schoop hit a tying RBI single off Taylor Rogers (2-4). After Robbie Grossman struck out, Cabrera dropped a hit into shallow center as Schoop raced around the bases. 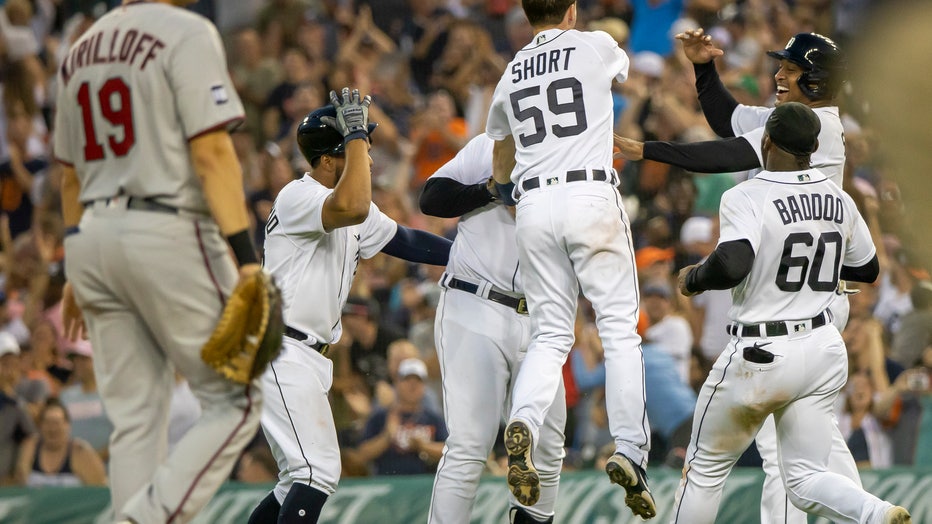 DETROIT, MI - JULY 17: Miguel Cabrera #24 of the Detroit Tigers hits a blooper single to drive in the winning run against the Minnesota Twins and celebrates with teammates during game two of a double header at Comerica Park on July 17, 2021 in Detroi

Detroit kicked off the doubleheader with a 1-0 victory. Grossman hit a leadoff homer, and four pitchers combined on a two-hitter.

José Ureña started for the Tigers and pitched three innings of two-hit ball before departing due right groin tightness. Daniel Norris (1-3) then got six outs, Kyle Funkhouser struck out the side in the sixth, and Gregory Soto worked the seventh for his eighth save.

"Obviously, we needed our bullpen to pitch well and I think they wanted to prove something," Detroit manager A.J. Hinch said. "All three guys came in and were great."

The Twins were shut out for the fourth time this season. They swept a four-game home series from Detroit prior to the All-Star break.

"If you look at what both teams did offensively today through seven innings of play, they’re probably not the types of at-bats we’re used to seeing from some of these guys lately," Twins manager Rocco Baldelli said. "I’ll bet some of that is from five days off."

Akil Baddoo hit a three-run triple for Detroit in the second game. Tyler Alexander gave up two runs and four hits in 3 1/3 innings.

Twins right-hander Kenta Maeda struck out eight in five innings. He was charged with three runs and three hits.

Minnesota scored a two-out run in the first on Donaldson’s RBI single. The Tigers grabbed a 3-1 lead in the second on Baddoo’s two-out triple to right-center.

Donaldson led off the fourth with his 14th homer, and Cruz’s bases-loaded infield single tied it at 3 in the fifth.

Twins: RHP Derek Law was placed on the 10-day injured list IL with a right shoulder impingement and LHP Danny Coulombe was placed on the paternity list. RHP Beau Burrows and LHP Juan Minaya were recalled from Triple-A St. Paul.

Tigers: Ureña and INF/OF Niko Goodrum, who suffered a left calf contusion prior to Game 1, were placed on the 10-day IL. RHP Alex Lange and OF Victor Reyes were recalled from Triple-A Toledo prior to the nightcap.