After testing positive for COVID-19, Green Bay Packers quarterback Aaron Rodgers revealed he had not been vaccinated against the virus.

GREEN BAY, Wis. - Green Bay Packers quarterback Aaron Rodgers said Friday he sought alternative treatments instead of the NFL-endorsed COVID-19 vaccinations because of an allergy he has to ingredients in two of the FDA-approved shots.

Rodgers, who has been tested daily as part of NFL protocols for the unvaccinated, came up positive for the coronavirus on Wednesday. He said he didn’t feel well on Thursday but was much better on Friday. He can’t rejoin the Packers for 10 days, missing Sunday’s game at Kansas City. Rodgers must have a negative test to return to the team on Nov. 13.

Speaking on the Pat McAfee show Friday, Rodgers admitted to taking ivermectin, an anti-parasitic drug that has become popular among some people who have declined COVID-19 vaccines. The CDC has repeatedly asked the public to refrain from taking the drug, citing the fact that there is no data supporting the claim that it prevents or treats COVID-19 infections.

In Friday’s 46-minute interview, Rodgers denied being "anti-vax," while repeating some of the misinformation already debunked by experts.

"I'm not some sort of anti-vax, flat earther. I'm somebody who is a critical thinker. You guys know me, I march to the beat of my own drum," Rodgers told McAfee. "I believe strongly in body autonomy, and the ability to make choices for your body. Not to have to acquiesce to some woke culture or crazed individuals that say you have to do something."

Rodgers told McAfee he has concerns about potential fertility issues had he taken one of the vaccinations.

Many scientists, including three doctors who specialize in reproductive health, vouched for the safety of vaccinations for couples who want to have a baby and urged people to seek out their doctors or nurse practitioners with any questions. The Centers for Disease Control and Prevention and obstetrician groups also recommend COVID-19 vaccines for pregnant individuals.

Rodgers claimed to be allergic to an ingredient in the mRNA vaccines created by Pfizer and Moderna. The Johnson & Johnson vaccine does not use mRNA, but Rodgers also declined to receive it.

The FDA briefly halted the use of the J&J shots this spring due to extremely rare blood clotting events among six female recipients.

Rodgers said his own research led him to a treatment that he did not detail, and he said the NFL was aware of the treatment protocol he was using, which took "multiple months."

"The league was fully aware of it upon my return to the Packers (in August)," Rodgers said. "It was at that point that I petitioned them to accept my immunization under their vaccination protocol."

That petition and a subsequent appeal were denied by the NFL, players' union and independent infectious disease consultants. 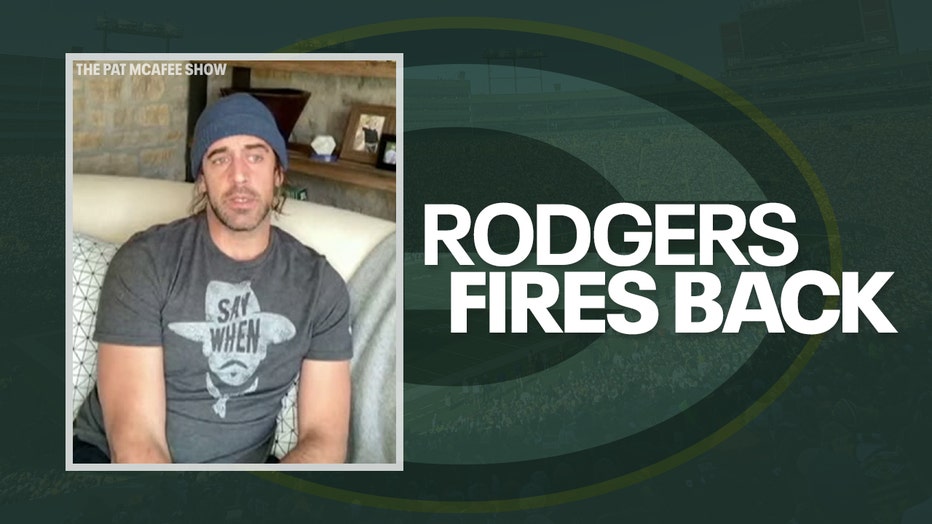 "And I also said, how come there’s no exemption for medical exemptions, religious exemptions, pre-existing conditions?" Rodgers added. "And they basically said those are all basically exempted but you would be put in the non-vaccinated category."

The league did not immediately respond to a request for comment.

For months, Rodgers had presented himself as "immunized" against the virus. He notably did not follow the protocols required of unvaccinated NFL personnel – going maskless on the sidelines and during news conferences.

"Needing to wear a mask at a podium when every person in the room is vaccinated and wearing a mask makes no sense to me," Rodgers said.

The CDC recommends those who are unvaccinated should wear a mask in indoor public places and practice social distancing. Wisconsin is currently considered a high transmission area.

Rodgers strongly questioned the NFL's protocols, along with any organization forcing health requirements on individuals.

"I believe strongly in bodily autonomy and the ability to make choices for your body, not to have to acquiesce to some woke culture or crazed group of individuals who say you have to do something," he said. "Health is not a one-size fits all for everybody, and for me it involved a lot of study in the offseason.

"If you weren’t in the vaccinated category you were in a different category which involved some draconian measures and protocols you would have to adhere (to), which in my opinion were not based on science and were more based in a shame-based environment to try and get as many guys to get vaccinated as possible, so that the league looks better to the rest of the world. That was the focus of these protocols ..."

The NFL coronavirus protocols were developed in conjunction with CDC guidelines and independent infectious disease experts.

Here’s an explanation of the NFL’s protocols and a breakdown of Rodgers’ case:

Who is responsible for knowing a player's vaccine status?

Each of the 32 NFL teams. Players must submit proof of vaccination to the team, not to the league office.

What is considered sufficient vaccination?

Players must take two shots of one of the approved vaccinations under NFL protocols – Pfizer or Moderna – or one dose of the Johnson & Johnson in order to be considered fully vaccinated against COVID-19. As Dr. Allen Sills, the league’s chief medical officer, has explained, players who have been previously documented as having had COVID-19 could be considered protected with one shot of those vaccines.

There’s also the possibility of a player having antibody levels that show a previous case of the coronavirus, and they can receive one shot to be protected.

"We have very clear protocols on vaccination requirements and what can be considered as being fully vaccinated under those protocols," Sills said.

NFL protocols, created in conjunction with the players' union, oversee not only team facilities but also stadiums, hotels and any travel arrangements.

Did the NFL know Aaron Rodgers was unvaccinated?

Yes, as did the Packers and the NFL Players Association.

Rodgers approached the NFLPA during the summer seeking approval of the treatment he took, details of which have not been made public. Dr. Thom Mayer, the union's medical director, consulted with Sills and with infectious disease consultants jointly agreed upon by the NFL and the union. They determined that Rodgers' treatment did not meet the qualifications or protocols to be considered a vaccine.

Rodgers has been required to wear a mask at the Packers' facility and to follow protocols designed for unvaccinated players. He is one of about 5% of the league's players considered unvaccinated.

Will anyone be penalized?

Very likely – if the NFL's investigation, which also includes looking into a Halloween party attended by Rodgers – finds violations of the protocols.

Most responsible would be the Packers for not eliminating any violations. They could be fined and stripped of draft choices. For example, the Las Vegas Raiders were fined $500,000 last year – when there were no vaccinations available – for breaking protocols. But no teams lost picks in the 2021 draft for COVID-19 violations.

Rodgers, naturally, could be sanctioned by the NFL, too. That probably would involve a fine rather than a suspension.

Sills has been very clear that enforcement of the protocols is "serious business."

This story was reported from Atlanta. The Associated Press contributed to this story.