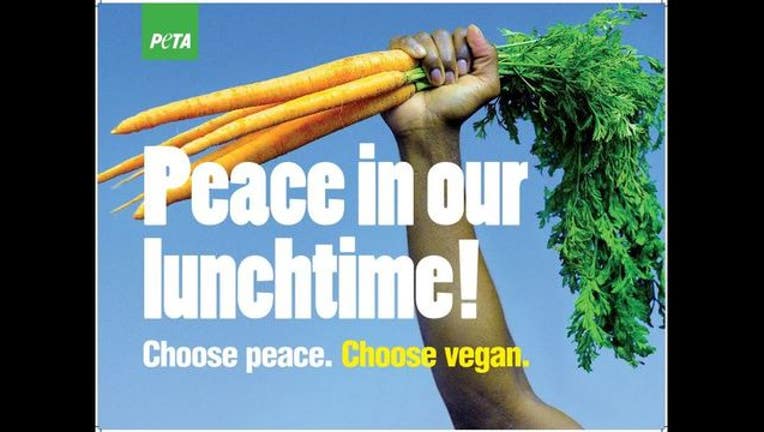 PETA plans to put up this billboard in Detroit to promote vegan lifestyle. Image via PETA

DETROIT (WJBK) - The Michigan National Action Network (NAN) says that PETA is as racist as the KKK and neo-Nazis for a billboard campaign in Detroit.

Earlier this week, the FBI named Detroit as America's most violent city based on crime numbers from the city of Detroit. (The police chief disputes the numbers. Click here for more on that). In response to those numbers, PETA announced on Wednesday a plan to run a billboard in Detroit that shows a fist clinching carrots with the words “Peace in Our Lunchtime!” and “Choose Peace. Choose Vegan.”

PETA President Ingrid Newkirk says the billboard message will be one of peace and says that cruelty to any living being bring on more violence.

“Violence and cruelty to any living being beget more violence and cruelty, whereas compassion for animals who suffer and are killed for the table promotes understanding and kindness. PETA’s message of peace encourages everyone to save lives, promote nonviolence, and make a difference every day simply by choosing vegan meals.”

Not only is the city violence a problem, PETA also said that Detroit is climbing up “Fattest Cities in America” lists.

The campaign is meant to drive the point home that Detroiters know what violence feels like and it should sympathize with animals who experience violent deaths when they're killed for human consumption. PETA believes that if Detroit were to stop eating animals, it would be more peaceful and healthier.

Sam Riddle, the political direct of NAN, said that campaign is putting PETA in the same class as racist groups.

"Detroit may be America's fattest and most violent city but to attribute that to us not eating our veggies is racist BS because Detroit is also America's Blackest, most segregated and poorest city," said Riddle.

He didn't stop there. Riddle cited the billboard campaign that will feature a black fist when he said that healthy produce isn't the problem, the lack of jobs and decent schools are.

"PETA compost is comprised of a displaced reality rooted in racist white privilege that would have us growing some damn carrots instead of growing jobs and good schools to combat crime and poverty born of wealth inequality and systemic racism that justifies corporate welfare before helping single mothers," he said.

"That ignorant-ass billboard of PETA makes those arrogant jerkwaters every bit as racist as the KKK and neo-nazis," said Riddle. "If PETA wants Detroit to improve our diet; PETA must address the historic roots of why we eat like we eat including slavery on plantations run by PETA ancestors."

In response to Riddle's statements, PETA issued the following statement:

At PETA, we combat hate speech like this with pleas for compassion for each other—regardless of race, gender, religion, species, or any other prejudice—and for putting aside hateful words and mean-spiritedness. We live by the principle of nonviolence, and since our inception, we have opposed all discrimination—but sadly, some of those who appeal for understanding are not always understanding themselves. Many of us feel relatively powerless in the face of violence, and choosing vegan meals is one way that each of us can make the world a kinder and more peaceful place. The "Peace in Our Lunchtime" billboards will go up in cities across the country, starting with Detroit because of its struggle to end violence, something everyone can do at breakfast. Instead of slamming those who work for nonviolence in their own way and hurling an accusation of racism at them—without even knowing what race they are—wouldn't it be much better to embrace them as fellow activists?