Cornerstone welcomed the guest of honor, who is also a reverend, a former United Nations ambassador and Congressman in Detroit to the charter school.

"Letting yourself be put in the situations where the best of life is served, and I think that’s the way I feel here," he said.

On Friday a portion of the high school was named in Young’s honor for his commitment to human rights and promoting education as a way to train the next generation of leaders.

Young reflected on the struggle for equality when he was beaten for his activism during the Civil Rights era.

"Later on I got kicked in stomped pretty badly, but you know - I didn’t even have a headache," he said.

It was a Detroit connection, Rev. Nicolas Hood, that led the founder of Cornerstone Schools, Clark Durant, a member of the GOP, to connect with Young.

"Today is a day of gratitude," he said. "It is a day of real gratitude to people whose names I may never know, who helped make all of this work," he said.

Mr. Young prayed for the students as they continue to learn the importance of leadership.

"Go in peace and lead the world to that peace that passes all understanding," Young said.

Cornerstone also recognized former students who are leaders in their own right - like Desmond Crenshaw who was the first in his family to attend college.

"Cornerstone took a young boy who was in a world of drugs and dysfunction, and it prepared him and filled him with opportunity, and sent him into a world, that he didn’t even know existed," said Crenshaw, Class of 1997.

"Taking a leap of faith for my role in city government, to start something to help others was something that was birthed in me at Cornerstone schools," said Charity Dean, Former Cornerstone Student, Class of 1997.

Young believes that it is the molding of these young minds to lead, is the success of the Civil Rights Movement.

"I call it faith," he said. "I have faith that we shall overcome." 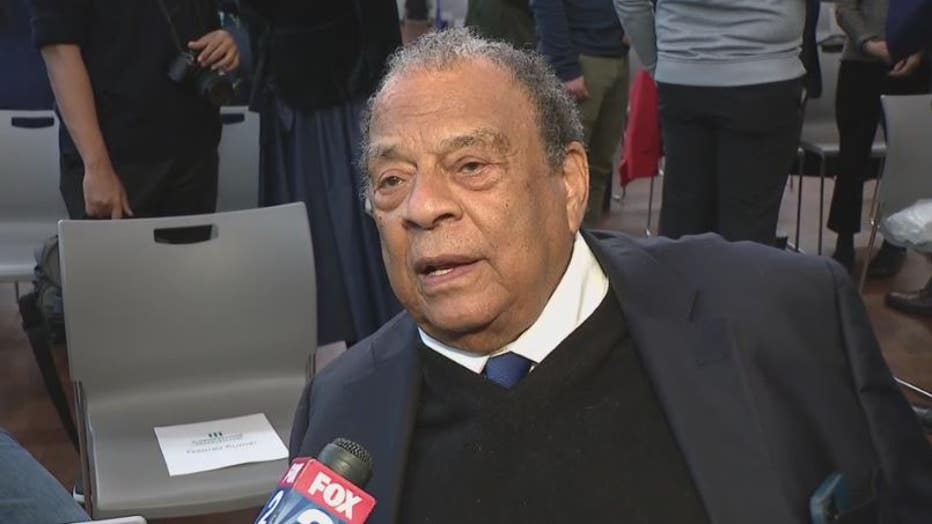