(FOX 2) - There are 16 varieties of apples grown in Michigan, but which ones are best for pies, a quick snack or other recipes?

Grace Derocha, a registered dietitian with Blue Cross Blue Shield, joined us on The Nine to teach us about the different kinds of apples and how to use them. You can get her recipes for apple noodles, baked apples and apple energy bites below.

Cooking with different kinds of apples

There are 16 varieties of apples grown in Michigan, but which ones are best for pies, a quick snack or other recipes?

APPLE NOODLES WITH TOASTED COCONUT
Ingredients:
1 apple per person
Coconut oil
Cinnamon to taste
Coconut flakes (enough for a sprinkle on each serving)

Instructions:
1.    Spiralize your apple, using the attachment that makes thin spaghetti-like noodles.
2.    Melt about ½ to 1 tablespoon of coconut oil in a skillet over medium-high heat. (If you're making multiple apples, add more oil as needed).
3.    Sauté your apple noodles in the coconut oil until softened and warmed through.
4.    Add cinnamon (to taste) and stir to combine.
5.    Once your apples and cinnamon are finished, remove from skillet and set aside on your serving plate.
6.    In the same skillet over medium heat, toss in your unsweetened coconut flakes and allow them to get toasty and brown (keep your eye on them).
7.    Top apple noodles with coconut flakes. 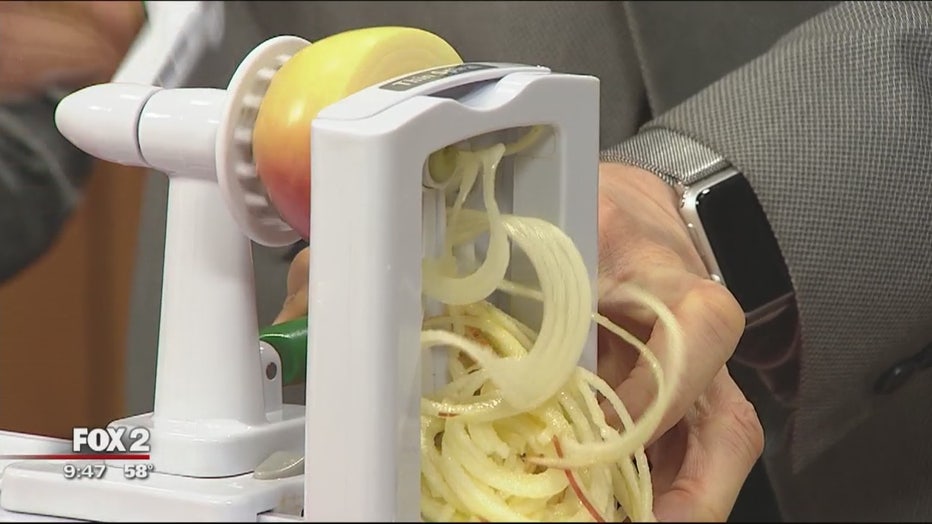 Instructions:
1.    Preheat oven to 350 degrees F
2.    Using a knife or an apple corer, carefully core the apples. Do no break open the apples.
3.    Brush the inside of the apples with half of the lemon juice.
4.    Place each apple on their own 10-inch square sheet of aluminum foil.
5.    In a small bowl, mix the remaining lemon juice, dried fruit, nuts, cinnamon, nutmeg and half the butter.
6.    Press dried fruit mixture into the center of each cored apple.
7.    Cut the butter into four equal parts.
8.    Place one piece of butter on top of each apple, over the center filled with the dried fruit mixture.
9.    Wrap each apple tightly with aluminum foil.
10.    Place aluminum foil wrapped apples on a cooking tray and cook for 30 minutes to 1 hour. Apples are done when they feel tender when squeezed.
11.    Serve warm and with frozen vanilla yogurt.

Instructions:
1.    Soak pitted dates in hot water for about 10 minutes. This will help the energy balls stick together. If your dates are really fresh, you will be able to skip this step.
2.    Break the pecans down in a food processor.
3.    Add the rest of the ingredients and mix until a dough forms.
4.    Roll into balls.
5.    Store in the refrigerator in a seal-tight container. Will last in the refrigerator for about 1 week. Enjoy!