Gilbert was recognized as Crain's Newsmaker of the Year, giving credit to his team for steering his business enterprises as he recovered from a stroke (watch the entire speech at bottom).

The biggest newsmaker in Detroit was the featured speaker at the Crain's award presentation named for it Friday.

"Culture, if everybody knows your culture and all the people leading your organization know it, then they can see the world through the prism of your philosophy. And make decisions, make priorities, take the actions and conduct the behaviors that are in line with that culture."

He was given the first-ever Crain's Hall of Fame award. He was lauded for his contributions to downtown's rebuild and investment in the last 10 years - while he applauded his five kids and wife during the tough transition.

"They are all here and so is my wife Jennifer," he said. "I want to thank them for all of their patience."

HIs speech at the awards hosted by the MGM Grand was more than just a nod to his team during his absence. It was a road map to his future plans.

Even as he was brought to the stage in a wheelchair, he stood at the podium for 40 minutes, going over the allotted time.

"We won't be raising a Cavs championship this year so I am very excited about this," he quipped. "Andre Drummond will be in here in a few minutes to talk about it." 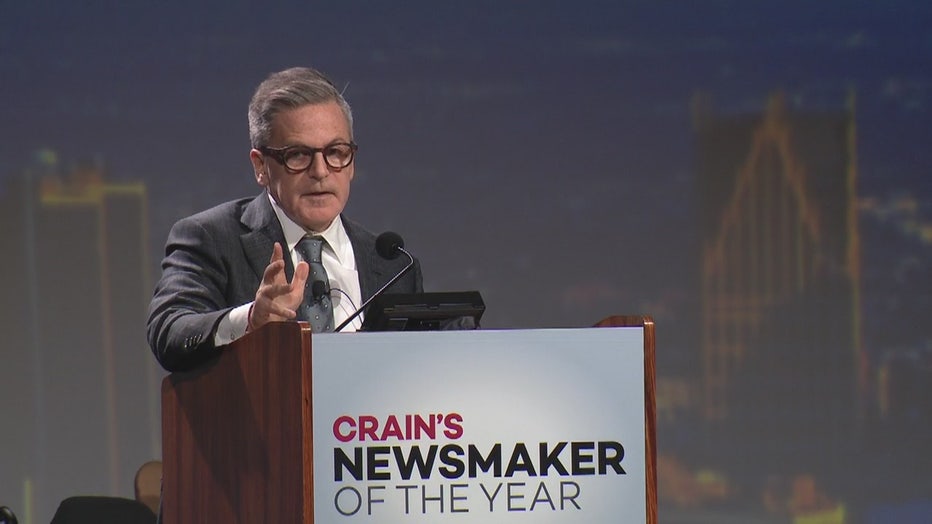 Dan Gilbert made his first public appearance since his stroke nine months ago at the Crain's awards Friday.

His sense of conviction about what needs to happen next downtown was clear - including the $300 million University of Michigan Innovation Center that will be built on the site of the old failed Wayne County Jail.

And yes, his MSU Spartan pride was as strong as his sense of humor.

"Becoming now the potential to graduate school of engineering or technology for one of the top two universities in Michigan," he said. "How does that happen."

Detroit Mayor Mike Duggan was on hand to enjoy the speech,

"It's good to see him where he is," Duggan said. "I am just really encouraged with how fast he has come back."

"You can tell, but this is the Dan Gilbert I remember shuffling his 3x5 cards and ad-libbing,"

"It was emotional and it means so much to the city," said KC Crain. "That guy is loved by the city of Detroit. He seemed back and he is going to continue on."

As he exited the stage, there was a sense of relief from supporters and friends that Dan Gilbert is very much - back.