A Waterford man says a deer that regularly hangs out in his backyard hasn't eaten in a week because of a can stuck over its nose. He's called animal control and the DNR, but hasn't gotten any help yet.

WATERFORD, Mich. (FOX 2) - A Waterford man has been working for a week to get a nearby deer help removing a can stuck on its nose.

According to Scott Sisk, the deer hasn't eaten in a week after it managed to get a container lodged over its snout, keeping it from eating or drinking anything.

A camera over his backyard caught the deer wandering nearby.

"I know it sounds like something so simple, but when you see her, you see the sadness in this poor deer's eyes, you just see her standing there," Sisk said.

"If you see her standing in the backyard, she just stands in the corner watching the other ones eat. It's just heartbreaking," he said.

MORE: River otter spotted in Detroit River may be 1st sighting in 100 years

After such a long time without food, the animal is starting to move slower Sisk said. He's reached out to both the state and animal rescue groups to get the creature some help.

He's also tried to help the deer, but every time he approaches it, it runs away. 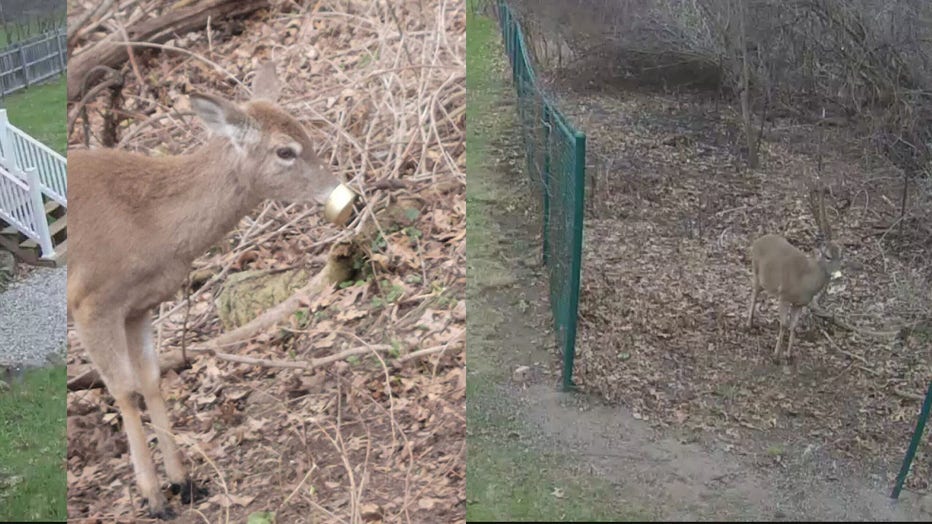 The Department of Natural Resources said that while it was unfortunate the deer was negatively impacted by human action, it recommended the public not approach the deer to its unpredictable nature.

"Due to the unpredictable nature of wildlife when humans approach too closely, and the potential for injury to both the animal and people hoping to assist it, the DNR recommends that people do not attempt to corner the deer to remove the can. Currently, the best course of action is to provide the deer with the opportunity to dislodge the can on its own while moving through nearby thick brush and wooded areas. The DNR will continue to work with the property owner to monitor the situation and determine the best course of action."