For three years, Monique Jackson has been raising Kensington. On Adoption Day, she officially became the girl's mother when her adoption was complete.

DETROIT (FOX 2) - Monique Jackson, who has raised 3-year-old Kensington since she was an infant, is now officially her mom after an adoption celebration on Adoption Day.

It started when the biological mother, a friend of the family, contacted Monique

"She reached out to me while she was pregnant. I had just recently lost my son, and she knew she didn't want to keep her. She wanted her to go to a good home, she didn't want to have an abortion," Jackson said. "It was definitely divine order. The day he was due is the day I took her home from the hospital, so you just never know what God has planned - you just never know."

According to the Michigan Adoption Resource Exchange, each year, 3,000 children in our state are waiting for permanent loving homes, so this adoption and the nearly 200 others in Wayne County court this year is truly something to celebrate. 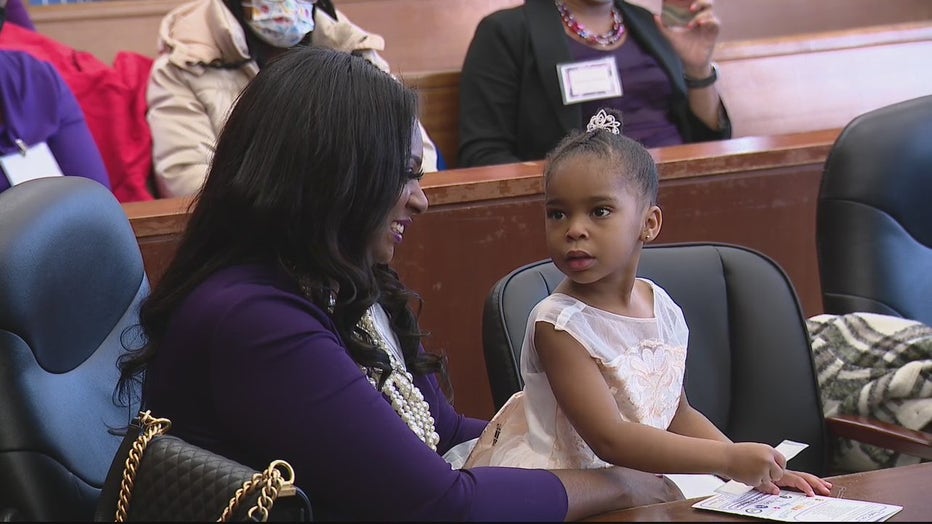 It's a day celebrated all around the state.

"We have adoption day throughout the state of Michigan during Thanksgiving week because it really is a moment to be very thankful," Kenny said.

Jackson is thankful, and as a foster mom to other children and adoptive mom to Kensington, she's hopeful others will get involved, too.

"There are so many children within the foster care system in the state of Michigan that need homes," she said. "It's the least you can do, and show children that they can be loved unconditionally."

While this is her first adoption, she sure hopes it won't be her last.

"I'm just happy it's finally come. It's right on time, right before Thanksgiving and so much to be thankful for," she said.