DETROIT (FOX 2) - Voters getting ready to go to the polls and the presidential primary is just three months away.

And now a federal lawsuit is making headlines alleging thousands of dead people are on the voter rolls in Detroit.

Dead people on the voter rolls in Detroit according to lawsuit

"This lawsuit is about making a clickbait headline," said Christy Jenson. "To make voters have less confidence in what is happening in their communities, their clerk's office. And it is really a direct attack on people of color."

Jenson, the Michigan Democratic Party Executive Director, said the lawsuit does not allege any voter fraud.

She also questions the allegations that Detroit has 2,500 dead people registered to vote. And she questions the plaintiffs - the Public Interest Legal Foundation - based in Indianapolis.  Critics claim it's a conservative organization targeting cities that are Democratic strongholds where people of color are the majority.

"They try to purge the rolls where there are many people of color that vote," she said

FOX 2 talked to Clerk Janice Winfrey who said she can't comment on pending litigation but added that it was a "witch hunt to disenfranchise the voters."

But the Michigan Republican Party lashed out on Twitter - citing the lawsuit's claim that more people are registered to vote in Detroit than are even eligible. 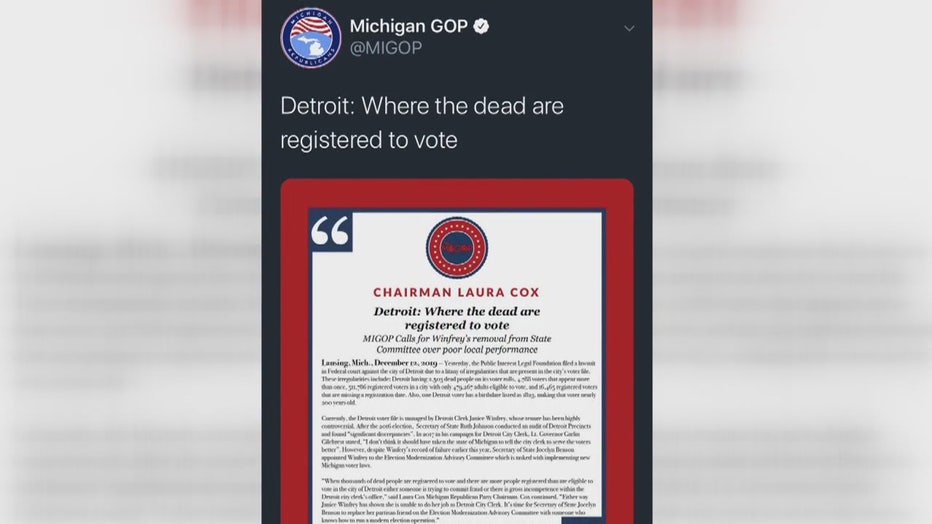 A Michigan Republican Party tweet claiming Detroit is where the dead vote.

One voter was listed as being born in 1823 - more than a decade before Michigan even became a state.

"We're just pointing out the incompetence that led to this ridiculous situation," said Laura Cox. "We are calling for (Detroit City Clerk) Janice Winfrey to be removed from the Election Modernization Advisory Committee."

Winfrey one of many appointed by Secretary of State Jocelyn Benson to a new Election Modernization Advisory Committee - no comment from them.

But Michigan Republican Party Chair Laura Cox is not holding back.

"It's 14 years before Michigan even became a state," she said. "Absolutely ridiculous. She needs to roll up her sleeves and focus on Detroit city clerk issues."

The Detroit Law Department not commenting - saying they have not yet seen the lawsuit.