Tony, Pam, and Forrest have one big thing in common: They were cast members on day one of Walt Disney World's grand opening back on October 1st, 1971.

LAKE BUENA VISTA, Fla. - Tony, Pam, and Forrest have one big thing in common: They were cast members on day one of Walt Disney World's grand opening back on October 1st, 1971.

Forrest Bahruth was a choreographer, Tony Zmorenski served as a recreation host, and Pam Nelson worked in the costuming tent.

A half-century later, they still have pixie dust in their lives.

Today, Bahruth is a show direct, Zmoreski works in safety and Nelson is a buyer for supplies used when couples get married at the parks or a big convention sets up shop.

These three are part of a small group of truly dedicated Disney fans, ones who’ve devoted a 50-year career to the theme park that started with a mouse.

They say they believe so much of the property’s rich history epitomizes Walt Disney’s vision.

"When I can be in the audience with our guests, without a nametag on, and see their reaction... One person is laughing, the other one has tears streaming down their face because it’s hitting an emotional chord. That’s what our creativity does. And, I think that’s phenomenal, " Zmorenski said. 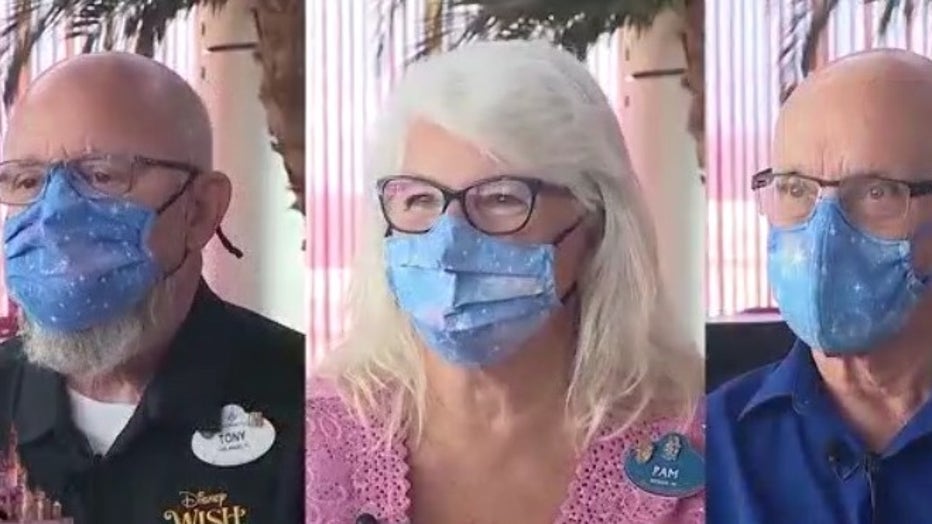 Nelson said, "Having the four parks, I think that was brilliant. We can’t possibly get all the guests into the Magic Kingdom, so I think it’s fabulous they have other options."

MORE NEWS: The history of Walt Disney World and its opening 50 years ago

"What I see is the tremendous influx of technology. I think Walt would love it," Bahruth said.

For millions of other Disney fans around the world, change isn't always easy. There are attractions, shows, even policies that are no longer at the parks that are missed by traditional Disney fans.

For Pam Nelson, it’s The Diamond Horseshoe. That attraction has gone dark.

"'Lights, Motors, Action Extreme Stunt Show,' we brought that one to life and it was such an interesting show from a safety perspective, but it was executed beautifully," Zmorenski said.

MORE NEWS: 'Electric and magical': Woman describes what Magic Kingdom's opening day in 1971 was like

Bahruth wishes, "If I thought back to something I miss, it would be the original Main Street Electrical Parade."

For these elite Cast Members, going with the flow has been the successful route and making that Disney magic pop up at any time, anywhere in the parks.

"All of the joy, the fun, and the memories we create… that’s the biggest surprise. Always has been, always will," Bahruth said.

If you see one of these 50-year Cast Members at Walt Disney World, say hello to them. They’ve got super interesting stories to tell.

All three of them know that Disney lives in the hearts of everybody who visits.

"No matter what’s going on in the world, everybody still loves Walt Disney World," Nelson said with a smile.

That’s just a small taste of what’s to come during The World’s Most Magical Celebration. For more of what you need to know about the anniversary festivities planned for the next 18 months, check out ‘What to expect during Disney World's 50th anniversary celebration’ by FOX 35.