FOX 2 - As many Southeast Michigan residents work to recover from Wednesday's storms, they're also finding it challenging as the wait continues for their electricity to be restored.

"It's been real rough, wife gets on the phone asking and they're not giving any time - they're giving two days," said Dana Quigley, Oak Park.

As these crews continue restoration efforts, DTE said some of its customers have experienced multiple outages as parts of Metro Detroit have dealt with powerful storms since June.

On Friday FOX 2 caught up with DTE crews, these workers hard at work in West Bloomfield as restoration efforts continue.

At the height of Wednesday's storm event, DTE says more than 600,000 of its customers lost power. As of Friday afternoon, nearly 230,000 were waiting to be restored.

"It's going well we got an army moving," said Trevor Lauer, DTE president. "We've got 2,800 linemen out in the field working."

Some of those crews were brought in from other states to handle a weather event that delivered two big punches.

"On Wednesday afternoon we had 60- to 70-mile per hour winds that came through very quickly," Lauer said. "That caused a lot of damage and then Wednesday night late, we had five hours of very intense thunder and lightning storm which also caused additional damage."

It's all this extensive damage that complicates restoration efforts.

"A lot of poles blown over, a lot of broken infrastructure. That tends to take a lot longer than plugging in a fuse and bringing customers back quickly," Lauer said.

Some customers who did not lose power initially found themselves with no electricity on Thursday.

"What we have to do is shut down pieces of that system so our employees can work safely on it, because you can't work on our system while it's energized," he said.

As these crews continue restoration efforts, DTE said some of its customers have experienced multiple outages as parts of Metro Detroit have dealt with powerful storms since June. 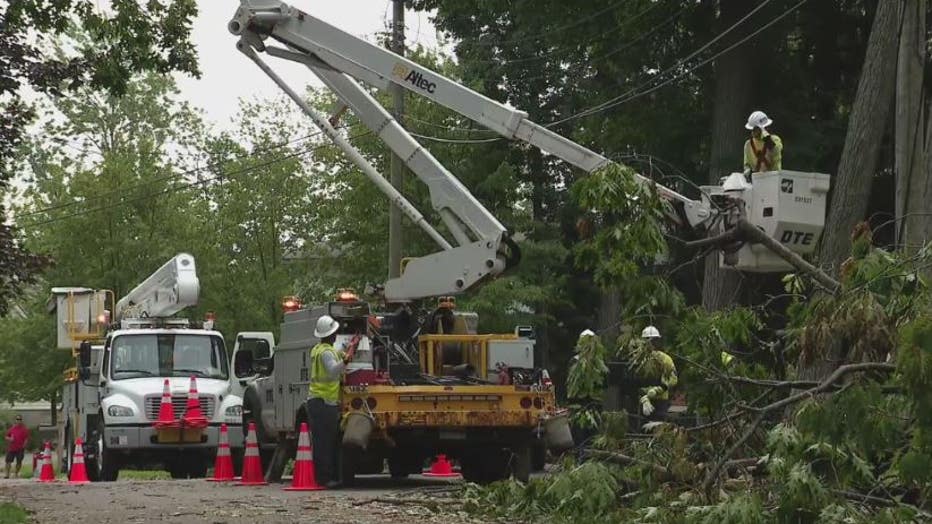 "We recognize how hard it is to be without power, and we apologize for the outage," Lauer said. "We need to do better and we're working on it at DTE."

Part of that promise to do better includes the continuation of trimming trees.

"(We want to) harden our infrastructure instead of using wood, use steel poles," Lauer said. "We need to rebuild it to be more resilient because the weather is getting stronger on us."