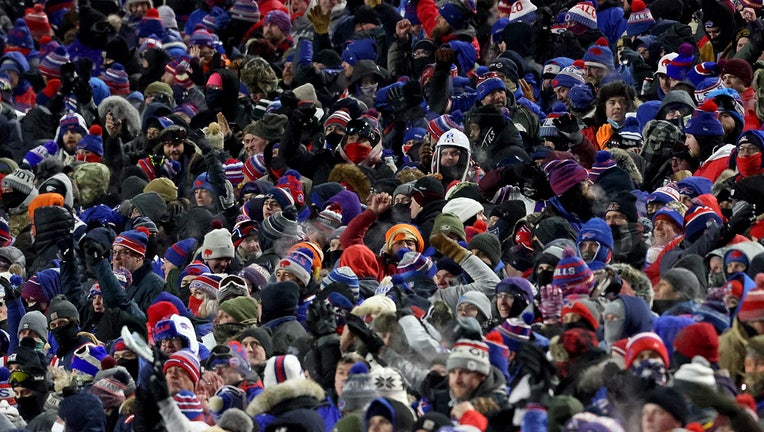 Fans during a game between the Buffalo Bills and the New England Patriots at Highmark Stadium on January 15, 2022 in Buffalo, New York. (Photo by Bryan M. Bennett/Getty Images)

Michael Nabb, 34, and Amber Nabb, 37, of West Seneca, made a court appearance for an arraignment Tuesday night. The charge against them — criminal possession of a forged instrument in the second degree — carries a maximum penalty of seven years in prison, Flynn said in a release announcing the arraignment.

In late December, Gov. Kathy Hochul signed a law that made it clear that forging a coronavirus vaccination record would fall under the fraud statute.

Flynn told reporters Wednesday that the Bills — which require vaccinations for home game attendance — had the pair on the team’s "radar" prior to the Jan. 15 playoff game. During the third quarter, team representatives and law enforcement approached the seated couple and took them to be questioned, he said.

Flynn said the team asked for the couple to be prosecuted. An email seeking comment was sent to the Bills' organization.

The Nabbs were released on their own recognizance, and are due back in court Feb. 22. Phone numbers could not be found for them, and messages were left with their attorneys.

Flynn said he wasn't looking to "jam them up" in terms of the legal outcome, "but I can't just let them go. I can't just say, ‘You know what? I'm going to disregard this law.'"