GRAYLING, Mich. - First, there was a disease. Then there were floods, what's next? Wildfires?

Yes, actually. Around 5 p.m. a fire encompassing 105 acres was reported in northern Michigan on Thursday before crews managed to contain the blaze about three hours later.

If the state hadn't already had enough to deal with, on top of COVID-19's spread across the state and floodwaters that caused evacuations around the city Midland, its emergency responders also responded to a wildfire about eight miles east of Grayling, a city located in Crawford County. Approximately 70 homes were evacuated before residents were allowed to return.

Despite the state receiving more than its fair share of rain over the last seven days, it only took "a few days of dry conditions, sunny skies and warmer temperatures" for threats of fire to grow, read a Department of Natural Resources press release. 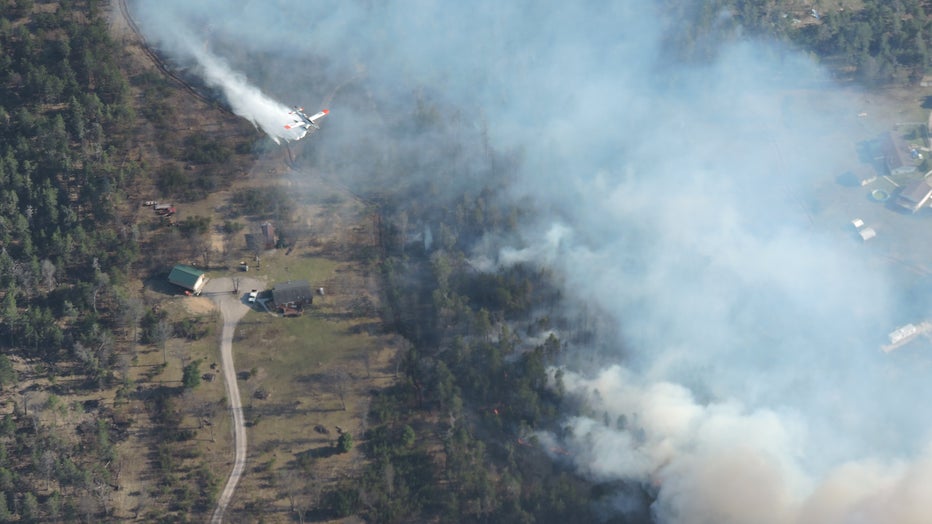 Several planes, including this U.S. Forest Service Fire Boss, were used to dump water on the approximately 105-acre fire that broke out in a privately owned jack pine forest near Grayling Thursday (Department of Natural Resources)

Officials with the DNR believe that Jack Pine, a tree species that spreads its seeds with the aid of high temperatures released by wildfires, made the area fire-prone.

"It was this combination of weather and fuels that led to the M-72 Fire."

Crews from the U.S. Forest Service, the DNR that battled the blaze, which torched a swath of land about a mile long and 0.2 miles wide. Several members of law enforcement from Crawford County, Grayling, and Michigan State Police also helped.