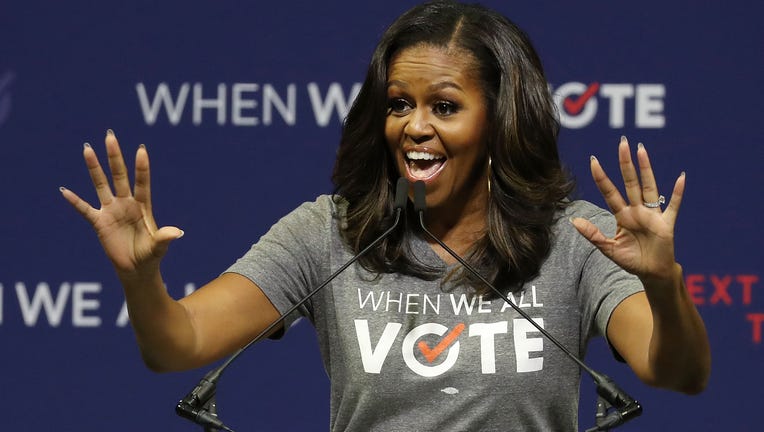 CORAL GABLES, FL - SEPTEMBER 28: Former first lady Michelle Obama speaks during a When We All Vote's National Week of Action rally at the Watsco Center at the University of Miami on September 28, 2018 in Coral Gables, Florida. Obama is the founder an

DETROIT (FOX 2) - Former first lady Michelle Obama is coming to Detroit. She's hosting a When We All Vote rally on March 27.

Obama has chosen Detroit to kick-off her When We All Vote initiative. This will be the first rally for the organization, which she launched with several celebrities in 2018 in efforts to increase voting in every election.

Her co-chairs are Tom Hanks, Lin-Manuel Miranda, Janelle Monáe, Chris Paul, Faith Hill and Tim McGraw. They all say When We All Vote is changing the culture around voting using a data-driven and multifaceted approach to increase participation in elections.

The rally will be held Friday, March 27 at Calihan Hall at the University of Detroit Mercy. Doors open at 4 p.m.

The rally is free and open to When We All Vote volunteers, partners, local high schoolers eligible to vote, leaders in our My School Votes program and  2020 Prom Challenge, college students, and educators. Tickets will be required.

Information about tickets has not yet been released.

Meanwhile, though, you can enter a contest to meet Michelle Obama in Detroit. You and a friend will get tickets to the rally as well as a meet-and-greet with her backstage.

Enter for your chance to win here.

The primary election in Michigan is Tuesday, March 10.