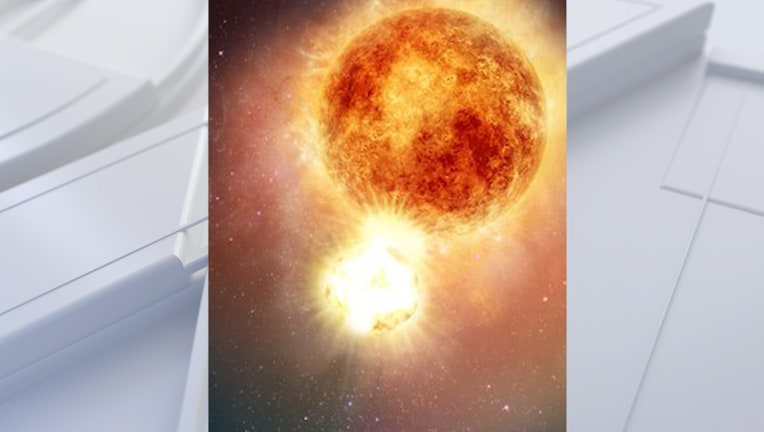 This illustration plots changes in the brightness of the red supergiant star Betelgeuse, following the titanic mass ejection of a large piece of its visible surface.

The supergiant star Betelgeuse is slowly recovering after a "never-before-seen, titanic" eruption, according to NASA.

The agency said astronomers used the Hubble and other telescopes to deduce that the star blew off a huge chunk of its surface in 2019.

"This has never before been seen on a star," the agency said on its website.

RELATED: Sonic boom: Hear the sounds of a meteor breaking up over Utah

Astronomers said their first clue came after the star mysteriously darkened in 2019 and an immense cloud of dust formed as the ejected surface cooled.

Astronomers said the star's photosphere is rebuilding itself.

"This doesn't mean the monster star is going to explode any time soon, but the late-life convulsions may continue to amaze astronomers," the agency added.

NASA said eventually Betelgeuse's ultimate fate is to explode as a supernova and that will be briefly visible during the daytime back on Earth.

Betelgeuse is a massive star — one of the largest stars visible to the eye alone — and if it were placed at the center of our solar system, the plume would extend past the orbit of Jupiter. T

Despite the incredible power and size of a potential Betelgeuse supernova, there wouldn’t be any immediate threat to Earth — although some astronomers warn that it could have an effect on our ozone layer (these kind of outcomes are still difficult to predict and model).