FOX 2 - Major freeway closures in Metro Detroit might make traveling a little tricky this weekend. As the winter comes to an end and construction season begins, the I-75 Modernization Project is kicking back into gear.

Plenty of freeway closures to keep an eye on this weekend

FOX 2's Kellie Rowe has the latest on which routes to use on Feb. 27 and 28 while freeway closures and construction ramp up.

Starting 11 p.m. Friday, I-75 will close in both directions from I-696 to 8 Mile Road so crews can demolish the Shevlin Avenue and Highland Avenue bridges over the freeway in Hazel Park.

MDOT will start shutting down ramps around 9 p.m. and start closing lanes at 10 p.m. That means all ramps to northbound I-75 from the Davison Freeway to 9 Mile, and all southbound I-75 ramps from 14 Mile to 9 Mile.

Southbound I-75 drivers can take westbound I-696 to southbound Woodward, then take 8 Mile east back to I-75. Keep your eyes peeled for detour signs.
On top of those closures, I-75 will be down to one lane between I-696 and 14 Mile in both directions over the weekend.

I-75 is scheduled to reopen at 5 a.m. Monday but will be down to two lanes between 8 Mile and 13 Mile in both directions. That means you could see some delays in your Monday morning commute.

Then a second total freeway closure could give you some issues. Starting at 9 p.m. Friday, I-94 is closing in both directions between I-75 and Conner. Crews will be demolishing the Frontenac Street overpass above I-94 in Detroit.

All entrance ramps to westbound I-94 from Chalmers to Chene will start closing around 7 p.m. 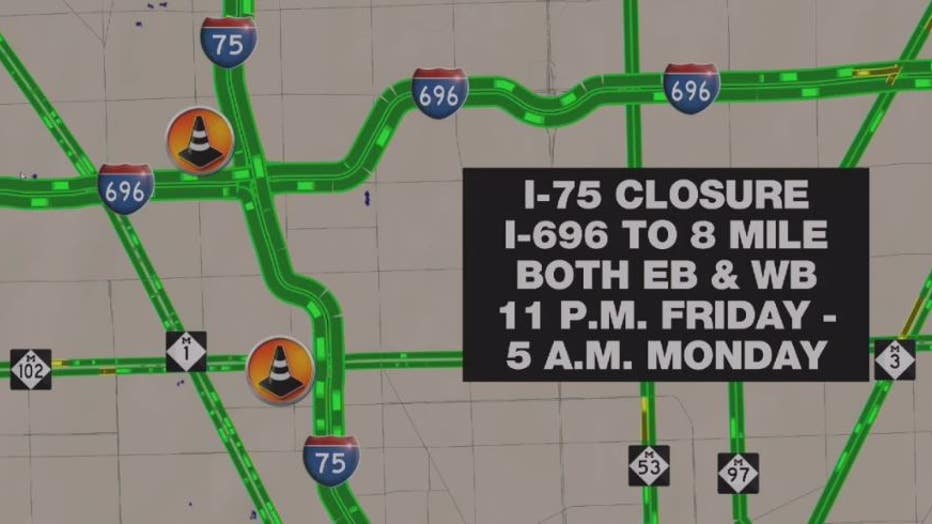 All lanes of I-94 are expected to reopen by 5 a.m. Monday morning.

One last note, some I-75 ramps will stay closed after this weekend until the end of construction season, around mid-November. These include eastbound and westbound I-696 ramps to southbound I-75 and all ramps along southbound I-75 from south of I-696 to Eight Mile Road.

For more traffic information including a real-time map go to fox2detroit.com/traffic