Katrina Croft remembers the night she got the devastating call that her daughter was involved in an accident. Kayla Harden was on her way home from work when she was t-boned at E. Forest and Outer Drive in Detroit.

Katrina Croft remembers the night she got the devastating call that her daughter was involved in an accident.

When Katrina arrived at Detroit Receiving, her 17-year-old was in a coma suffering from severe brain trauma and a broken clavicle.

"When I saw her I fainted, it was hard seeing child like that," Katrina said.

Especially because Kayla had just graduated from Detroit's University Prep and had earned scholarships to attend Alabama State.

"They were telling me she may never walk again, she may not talk," she said. "(They said) it may take a year or longer than the state she is in now."

"I didn't know what happened or where I was," said Kayla. 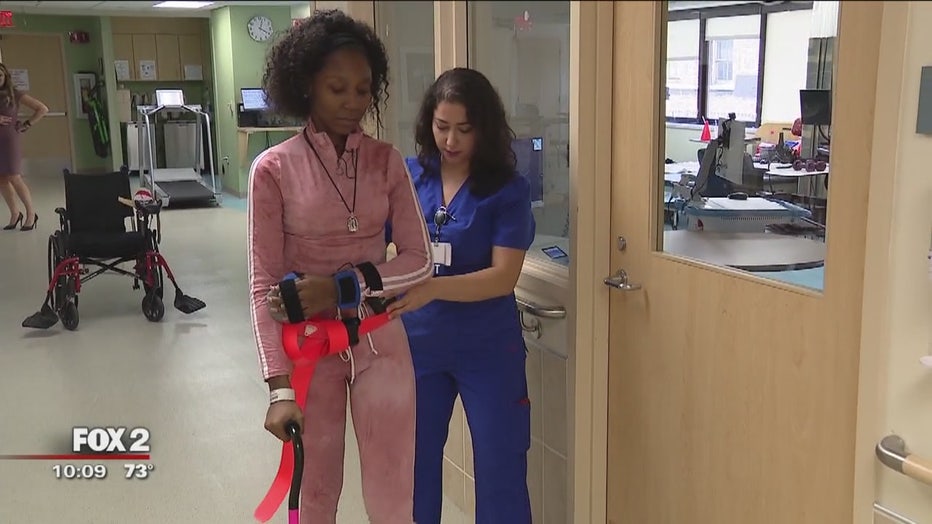 Kayla had broken her clavicle bone and because of scattered brain contusions, was unable to move the left side of her body. She lost her short-term memory and was unable to speak or eat on her own.

She said that she kept thinking, "Am I going to be able to move on still go to college and be what I want to be."

But two and half months later - the star student has surpassed all expectations - and thanks to DMC's Rehabilitation Institute of Michigan, is on the road to recovery.

"Every couple weeks she would make me upgrade my goals, she always surprised me she is a very strong lady," said Mahtab Koochaki, physical therapist.

Kayla works every day with a speech, occupational and physical therapist and just learned she will be released from rehab later this week.

And more good news, Alabama State recently contacted Katrina and told her that her daughter is welcome to attend the university when she is ready.

"The school is still praying for her and any scholarship that she had will be held for two years," Katrina said. "And they can't wait to meet her, that just touched me."

Kayla is looking forward to going home, being with her family and friends and snuggling her dog. And hopefully, attending college next fall in hopes of one day becoming a doctor.

"Learn everything I need to know to become an OBGYN," she said.

"I just thank God for healing her," Katrina said.