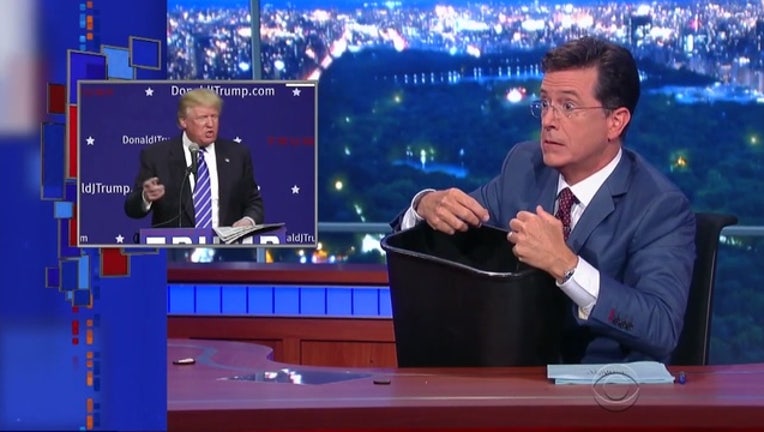 NEW YORK (AP) — Stephen Colbert began his tenure as host of the CBS "Late Show" Tuesday with a tribute to predecessor David Letterman, a brief conversation with rival Jimmy Fallon and a surprise cameo from Comedy Central buddy Jon Stewart.

After months of buildup, the former host of "The Colbert Report," returned to late-night TV by gorging on Donald Trump jokes and noting his transition from playing the character of a cable TV blowhard to being himself.

"With this show I begin the search for the real Stephen Colbert," he said. "I just hope I don't find him on Ashley Madison."

Colbert was joined by actor George Clooney and Republican presidential candidate Jeb Bush. He completes the remake of late-night network television from the days of Letterman and Jay Leno to the two Jimmys (Fallon and Kimmel) and himself.

Colbert showed a picture of the now-retired Letterman, saying that he bowed to no one as a Letterman fan.

"We will try to honor his achievement by doing the best show we can and occasionally making the network very mad at us," Colbert said.

CBS Corp. boss Leslie Moonves was close at hand in the front row of the renovated Ed Sullivan Theater, jokingly holding a switch that could turn off the "Late Show" in favor of reruns of "The Mentalist," which ran in the weeks before Colbert took over.

Colbert showed off video walls behind his desk, one of which was set to a view of New York's Central Park. And he pretended to change channels, alighting on Fallon at NBC.

"Have a good show, buddy," Fallon said. "See you in the locker room."

The show opened with a filmed skit depicting Colbert traveling across the country to sing the national anthem, accompanied by various folks at a bowling alley, in a factory and at a youth baseball game. At the end, an "umpire" at the baseball game took off a mask to reveal himself as a bearded Stewart, who shouted, "Play ball!"

His former Comedy Central colleague stepped down from "The Daily Show" last month, but Tuesday was about beginnings, and the audience greeted him with a standing ovation.

Colbert appeared most comfortable seated behind his new wraparound desk, conversing with his guests. Clooney, who several months ago handcuffed himself to Letterman in a joking attempt to get him to stay, was given a Tiffany paperweight engraved with "I don't know you" as a wedding present.

"What is it like to be the arm candy in a relationship?" Colbert asked Clooney. Noting that the movie star had no new movie to promote, they made one up and showed "clips" of the film.

In his appearance, Bush noted the number of drawings of Colbert that appeared on the ceiling of the theater.

Earlier, fans who exited the taping were bubbling over with enthusiasm.

"It was amazing," said Shira Margulies, from Queens. "It was fantastic. It was joyful. It was energetic. It was surprising. It was everything we expected and more."

Sanjay Chhabra, from New Jersey, said he was impressed by everything about the show.

"Stephen Colbert was on point," Chhabra said. "I mean he was prepped, ready to go. He's off to a pretty fantastic start."

The guest list for Colbert's first week of shows indicates he plans to get beyond the typical show biz patter of many talk shows. Vice President Joe Biden will visit Thursday and the CEOs of Tesla Motors and Uber also will make appearances. Comic Amy Schumer, actress Scarlett Johansson and author Stephen King also are on the schedule.