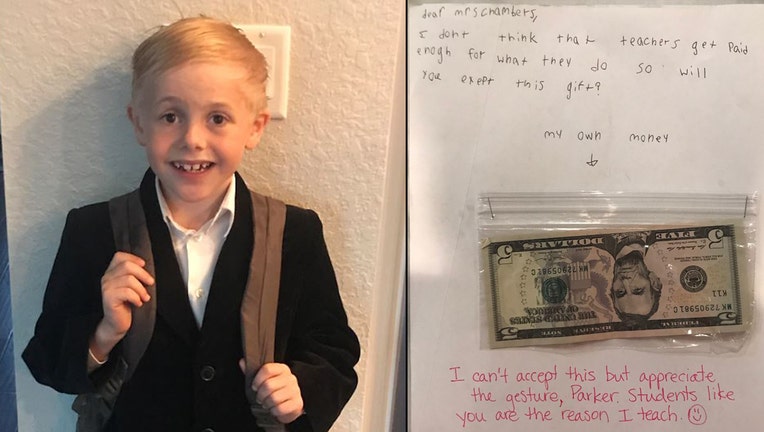 TAMPA, Fla. - A Tampa third-grader gave his teacher an unexpected surprise: $15 and a note saying he didn't think teachers are being paid enough.

Shortly before Halloween, Mary Hall Chambers opened a folder in her classroom at Gorrie Elementary School in Tampa. Inside was a note from 9-year-old Parker Williams, along with cash in a zip-top baggie.

"I don't think that teachers get paid enough for what they do so will you except this gift?" he wrote in black ink. He added, "My own money" and drew an arrow to the baggie below.

Chambers was charmed by his kind gesture. She later found out that the $15 came from his birthday money.

"I've had sweet gestures from students in the past but never money," said Chambers, who has been an elementary school teacher for 16 years.

"I can't accept this, but appreciate the gesture, Parker," she wrote back. "Students like you are the reason I teach." 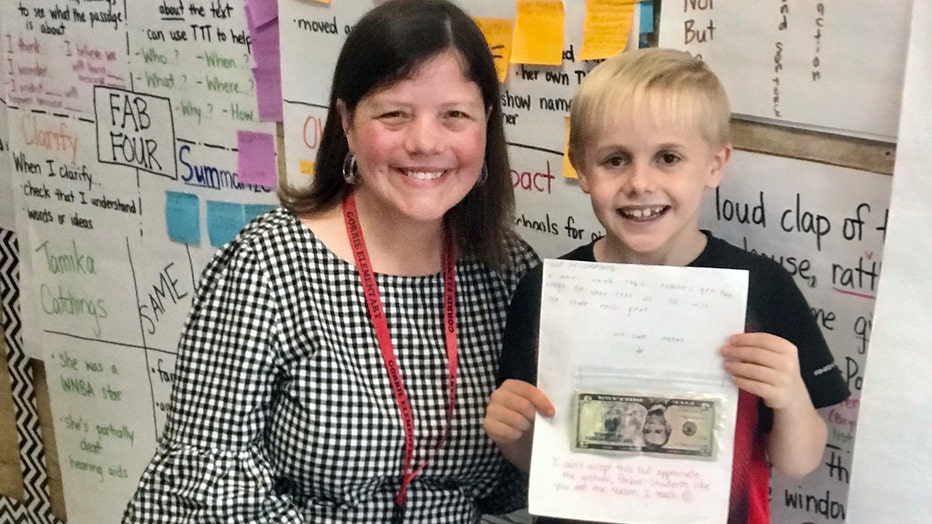 Parker's father said his son didn't tell anyone that he planned to give his birthday money to his teacher.

"None of us knew about it until I opened his folder the next morning and choked up," Parker's dad, Darrell Williams, told FOX 13.

Williams said he's spoken with his kids about teachers' salaries, pointing out that Parker's aunt recently got a master's in education.

"We talk about it being an absolutely noble profession and they don't get paid enough," he said. "Parker understood that and recognizes the huge impact they make in our lives."

He said his son may have been inspired by his older brothers, who created a youth volunteer organization to give back to the community.

"He did it out of the goodness of his own heart, he's a great kid," Williams said. "I get choked up still thinking about it. That's what kind of kid he is."

Parker's desire to bring about change won't stop with the note to his teacher, according to his dad.

"He told me today, 'I want to meet President Trump because I believe he can do something about this,'" Williams said.

The average starting teacher in Hillsborough County makes around $19 an hour. More experienced teachers make close to $25 an hour.