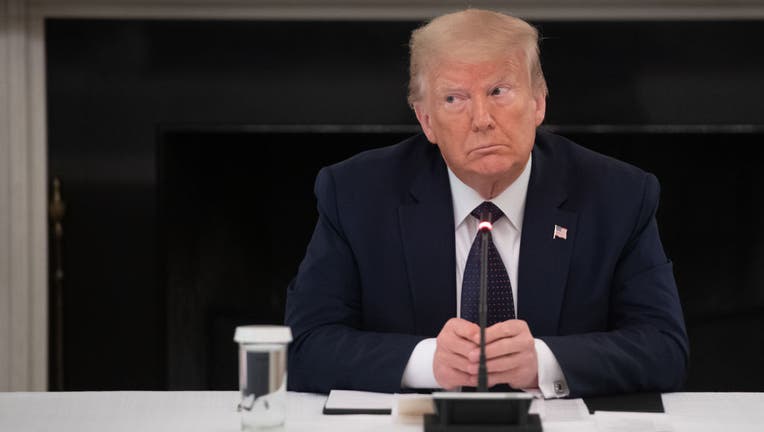 US President Donald Trump hosts a roundtable discussion with law enforcement officials on police and community relations in the State Dining Room at the White House in Washington, DC, June 8, 2020. (Photo by SAUL LOEB / AFP) (Photo by SAUL LOEB/AFP v

The $600 payment, which is in addition to normal unemployment benefits, “was the right thing to do,″ Scalia said, but is no longer needed as the economy begins to recover.

The money, included in a government relief package enacted in late March, has helped millions of workers stay in their homes and pay bills even as the unemployment rate surged to its highest levels since World War II.

The payments are set to expire on July 31st and Democrats have pushed a plan that would extend the enhanced benefit through January. The Democratic-led House approved the proposal last month but it is considered unlikely to advance in the Republican-controlled Senate.

Scalia pointed to an unexpectedly rosy jobs report released last Friday. By the end of July, “we expect the economy to be deep into the process of reopening, with shutdown orders ended and millions of Americans freed to return to work,″ he told the Senate Finance Committee.

Unemployment benefits will still be needed in August and beyond, “but the circumstances that originally called for the $600 plus-up will have changed,″ Scalia said. “Policy will need to change as well.″

Democrats challenged that view, saying the unemployment rate is likely to remain at historically high levels through the summer at least.

Friday’s jobs report showed that unemployment dropped unexpectedly in May to 13.3 percent as reopened businesses began recalling millions of workers faster than economists had predicted. However, the jobless rate is still on par with what the nation witnessed during the Great Depression.

RELATED: Many more likely sought US jobless aid even as layoffs slow

Watching President Donald Trump “celebrate victory” Friday as the jobs report was released “is yet another sign that he doesn’t understand what it’s like for people born without a real estate portfolio,″ said Oregon Sen. Ron Wyden, the panel’s top Democrat.

“Speaking conservatively, more than 20 million Americans are still out of work today,″ Wyden said. "And I bet you’re not celebrating if you’re among the many people who don’t know how they’re going to pay the rent or put food on the table this month.″

Sen. Chuck Grassley, R-Iowa, the Finance Committee chairman, said that the $600 weekly payments were “poorly targeted,″ with the result that most recipients are being paid more on unemployment insurance than they earned when they were working.

“This discourages people from returning to work or taking a new job, delaying the recovery″ Grassley said.

Grassley and other Republicans cited a report by the Congressional Budget Office indicating that extending the $600 payments through January would mean that about 5 of every 6 recipients would receive benefits higher than the amount they would have earned from working.

Grassley said he hears from Iowans every day who wonder why they are earning less than others they know who are getting unemployment benefits. Employers also have complained that the generous benefits are resulting in fewer applicants for job openings, he said.

Wyden called that evidence anecdotal and said the idea that Americans don’t want to go back to work “is dead wrong and insulting.″

Scalia said he agrees that most Americans “are excited to go back to work,″ but added that ”at the margins, a certain number will choose not to work” because of the $600 payments.

Sen. Sherrod Brown, D-Ohio, said the fact that those collecting the additional $600 per week receive more than their usual pay only shows that “they were underpaid before.″ He pushed a plan to raise the minimum wage to $15 an hour, a concept Scalia resisted.

Sen. Michael Bennet, D-Colo., said lawmakers made “a profound mistake” by allowing the enhanced payments to expire in July. Instead, he said, the payments should be tied to economic conditions, so they continue as long as unemployment remains high.

With the unemployment rate expected to remain in the mid-teens through July, lawmakers will face pressure to compromise on some form of renewed benefits for the jobless.

So far there are no formal negotiations on another relief package. But analysts say the need to address the fate of the $600 weekly benefits could force a resolution of the issue this summer.