DETROIT (FOX 2) - It was the trip of a lifetime for dozens of veterans on board an honor flight bound for Washington D.C., touring monuments, triggering memories of service for these men. The NFL helped make it possible, along with some Detroit Lions legends who were there to help the vets through this emotional ride.

Vets moved to tears on honor flight to Washington D.C.

They will all tell you -- we don't talk about much about the war.

"I'm not the one that should be honored it's my brothers that didn't make it home," said Vietnam veteran Joe Abbatt.

They will all tell you -- we don't talk about much about the war, especially Abbatt.

"It took me over 40 years, I didn't even want to think about. It was probably the worst time of my life. It was a period of time I just wanted to put away," he said.

This honor flight sponsored by the non-profit Talons Out and the NFL was a safe place for 77 veterans to recall their time of service.

Each vet brought a guardian, and Joe chose his son.

"I am honored that he served our country to give me the freedom, to give us the freedom," Jeff Abbatt said.

It was triggering for Blue, drafted at 18 for the Vietnam War.

"We lost so many people, but we thought we were doing the right thing," he said.

"We just walked the length of the wall and I had my hand on it, and it's just sad -- all them guys. Kids," said his brother-in-law, Dan Ivans.

Blue was there to check the sprawling list of names for a friend he assumed was killed.

"We did have one bit of good news, one of the guys he was looking up that he was concerned about, we can't find him, so he must have made it," Ivans said.

Support, that's what Lions Legends like Herman Moore were there for.

"If I didn't have somebody like Herman, it would be very hard for me because I would just be walking around thinking to myself," said Vietnam veteran David Moore. 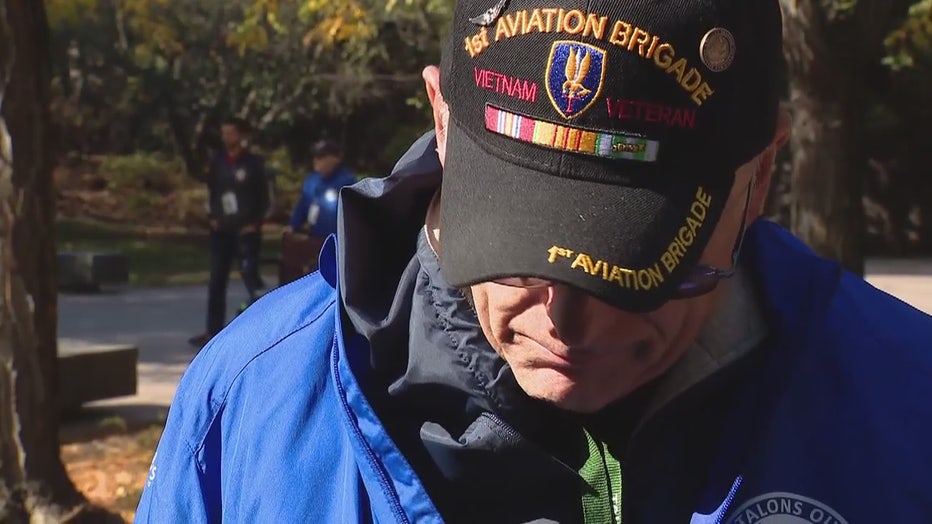 For Moore, it was a day of much-needed therapy.

"I'm 100 percent PTSD, so a lot of things I suppress. I brought out today, more than I would usually bring out," he said.

Vets flooded with memories both good and bad on honor flight to Washington D.C.

This kind of respect for service David felt during this trip is something he isn't used to. We heard that a lot from the Vietnam vets.

"When I came home my friends didn't say nothing, you know. Not where were you? How are you doing? Nothing," Moore said.

The finale for these guys was giving them the welcome home some never got. The emotional day capped off at the Air Zoo Museum Kalamazoo where thousands paid their respects to these brave heroes. Moments they'll never forget.