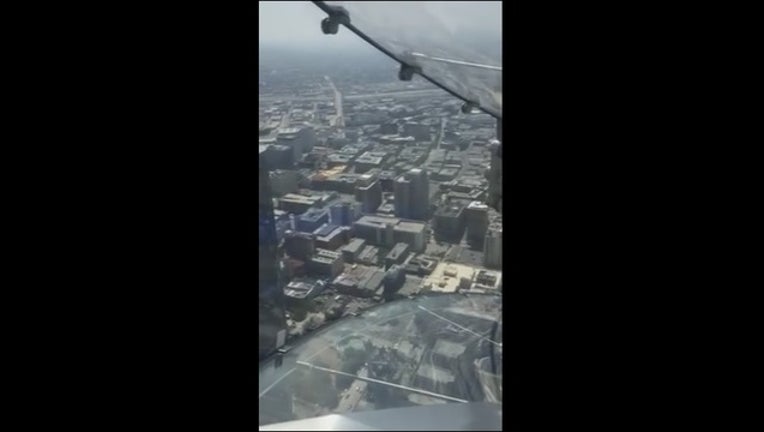 Gayla Yashar filed a lawsuit against the operators of the Skyslide. She claims she broke her ankle when she landed at the end of the slide 1,000 feet above the ground. Image: YouTube screenshot.

(FOX News) Call it the fast and the furious - and the broken.

Just weeks after the opening of downtown Los Angeles' Skyslide - a recreational glass slide 1,000 feet above the ground on the outside of the U.S. Bank Tower - a Woodmere, NY, woman has sued, calling foul on the ride, which she says caused a broken ankle.

Gayle Yashar, along with hubby Morty, filed a suit last week in Los Angeles Superior Court, taking aim at OUE, the building's landlord, and Legends, the hospitality group that operates the slide. The couple is seeking unspecified damages to cover medical costs, legal fees and lost earnings. Yashar charges "dangerous and defective design" of the attraction, which travels from the 70th to 69th floor and allegedly doesn't give riders enough time to slow down at its base.

The suit also charges that a gap between the end of the slide and stacked mats meant to catch riders actually snags thrill-seekers' feet.

Yashar recorded her slide down and posted it to YouTube. As she reaches the landing spot, you can hear laughter for a few seconds followed by an audible 'ow' as she stands up.