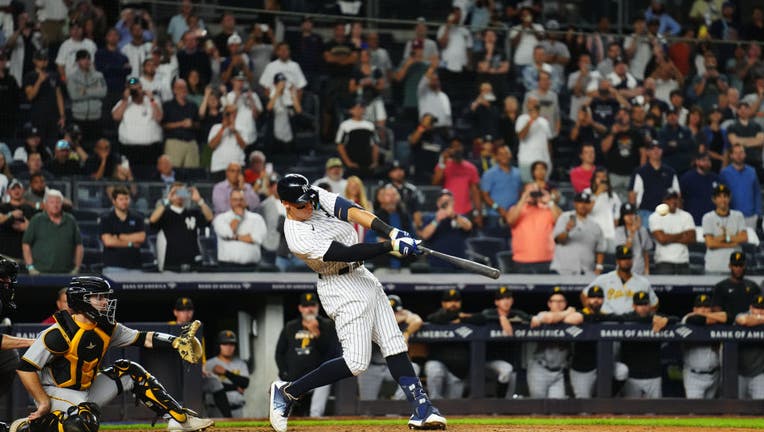 SOUTHFIELD, Mich. (FOX 2) - On Tuesday, New York Yankees slugger Aaron Judge hit his 60th home run of the 2022 season, putting him just one behind Roger Maris' American League season record of 61. You can watch him tie or even break the record Thursday night on FOX.

After hitting his 60th home run of the season on Tuesday - a 3-1 sinker that he sent 430 feet into left field at Yankee Stadium - he doubled twice on Wednesday in a 14-2 rout of the Pirates.

On Thursday, New York stays home with a four-game series against the longtime rival Boston Red Sox. Could this be the night he ties and even breaks Maris' record?

He's currently tied with Babe Ruth for the second-most home runs ever hit in a Yankee uniform in a single season.

Ruth became the first major leaguer to hit 60 homers when he connected off Washington’s Tom Zachary for a two-run drive to right in the eighth inning on Sept. 30, 1927, the next-to-last game of the season.

They'll likely be standing for every at-bat for the rest of the season, too.

As he stands on the edge of history, he's also looking at a possible Triple Crown, something that hasn't been done since the Detroit Tigers' Miguel Cabrera did it in 2012.

The game is on Thursday night on FOX - which you can watch on FOX 2 (sorry, we can't stream it).

Watch Aaron Judge continue his pursuit of the home-run record book Thursday night when the Yankees host the Red Sox starting at 6:30 p.m. ET on FOX and the FOX Sports App).