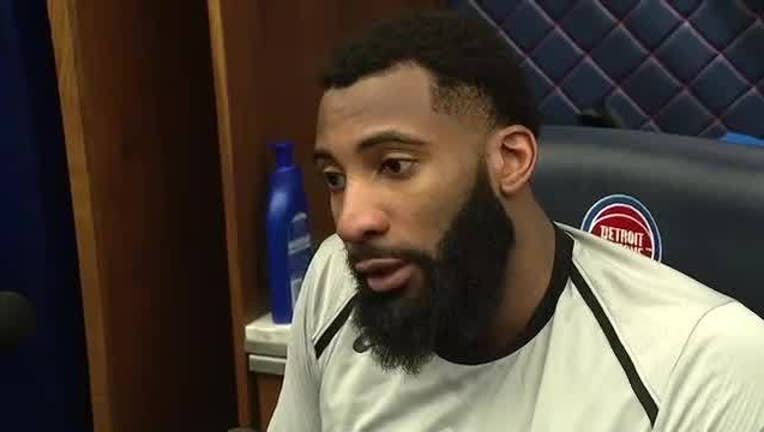 LaMarcus Aldridge scored 24 points, DeMar DeRozan had 17 points and 13 points, and the Spurs returned home after a 25-day absence to beat the Detroit Pistons 105-93 on Wednesday night and snap a three-game skid.

"They played desperate and I don't think we did the entire game," Detroit coach Dwane Casey said. "We played in spurts, but we didn't play desperate as long and as much as they did."

The Pistons had won three straight and seven of eight but were facing a team in dire need of a homecoming.

The Spurs returned to the AT&T Center for the first time since Feb. 2 after going 1-7 on their rodeo road trip, the worst they have fared on their annual excursion.

San Antonio fell to eighth in the Western Conference during that stretch with 20 games remaining prior to Wednesday's outing.

"We haven't done well on the road, so we have to take care of home court at the least," Aldridge said. "Tonight was a good start."

The road trip included a 12-point loss in New York against a Knicks team that had lost 18 straight at home.

San Antonio ensured there wasn't a repeat of that lackadaisical effort.

Marco Belinelli had 17 points off the bench and Derrick White had 15 points, six rebounds and four assists.

San Antonio shot 52 percent from the field and held an opponent under 100 points for the first time since Jan. 9.

The Pistons were limited to seven free throws and shot 36 percent from the field.

"When we play good defense, we have a chance to win games," Spurs coach Gregg Popovich said. "When we were at our best this year, for that one run, we were first, second or third in every category, defensive efficiency and all that sort of thing. Then all of a sudden it went bye-bye. This is who we have to be."

Reggie Jackson scored 22 points for Detroit, which had not lost since Feb. 13 at Boston. Blake Griffin added 17 points and Andre Drummond had 10 points and 17 rebounds.

The Spurs opened the game 5 for 7 on 3-pointers in building a 12-point lead, but the inconsistency that plagued them on their trip made the return flight. The Pistons went on a 17-4 run to take a 48-47 lead. San Antonio missed two shots and committed five turnovers during the drought.

Belinelli's off-balance shots helped steady the Spurs. The 12-year veteran was 3 for 4 on 3-pointers, giving San Antonio the lead on his first two shots and his final 3 extending the advantage to 75-64 late in the third quarter. His off-balance, 16-footer gave the Spurs a 97-88 advantage with 3:39 remaining.

"That's how we've got to play," DeRozan said. "We can't get down on ourselves when we make mistakes offensively (and) defensively. We've got to just go out there and focus, play hard, playing together and communicating. When we do those things, something always tends to go our way."

Belinelli's jumper was part of a 9-0 run after Detroit point guard Ish Smith's layup had cut it to 90-88 with 5 minutes remaining.

Jakob Poeltl added 11 points and 14 rebounds for the Spurs and also had a key block against Drummond with 2:21 remaining and the Spurs up 99-91.

"I thought he had 10 blocks but he had three," Aldridge said. "It felt like 10. He was great, he was active. He definitely gave us a big spark."

Pistons: Detroit has lost four straight in San Antonio with its previous win coming Jan. 6, 2015. ... Spurs fans are still upset with Zaza Pachulia, who injured Kawhi Leonard in Game 1 of the 2017 Western Conference finals while with Golden State by stepping under the All-Star forward on a 3-pointer. Pachulia was loudly booed when he was introduced and touched the ball. ... Wayne Ellington had 11 points, leaving him one shy of 5,000.

Spurs: Bryn Forbes exited the game with a bruised right calf with 5:34 remaining in the first quarter. Forbes needed assistance walking to the locker room after he and Griffin got tangled up after diving onto the floor to corral a loose ball. ... Forbes made a pair of 3-pointers before exiting, giving him 237 to surpass Manu Ginobili (236) for third among Spurs' players in their first three seasons. Gary Neal tops the list with 301 3-pointers in his first three seasons, followed by Davis Bertans at 276. . Poeltl had his first double-double as a member of the Spurs.

San Antonio hosts Oklahoma City on Saturday in the second contest of a three-game homestand.

The Spurs defeated the Thunder 154-147 in double overtime on Jan. 10 in their previous meeting in San Antonio.

Aldridge had a career-high 56 points in the victory, the first time he hit the half-century mark in his 13-year career.

"That's not happening again," Aldridge said. "No one lets you do that twice."

Pistons: At Cleveland on Saturday night.