He owes the Tampa Bay defense that sacked Aaron Rodgers five times, and a curious late call on fourth-and-goal by the Packers as Brady and the Bucs beat top-seeded Green Bay 31-26 for the NFC title Sunday.

The Bucs (14-5) will face the Kansas City Chiefs (16-2) at Tampa’s Raymond James Stadium on Feb. 7. No, a host team in the Super Bowl has never happened in 54 previous games. 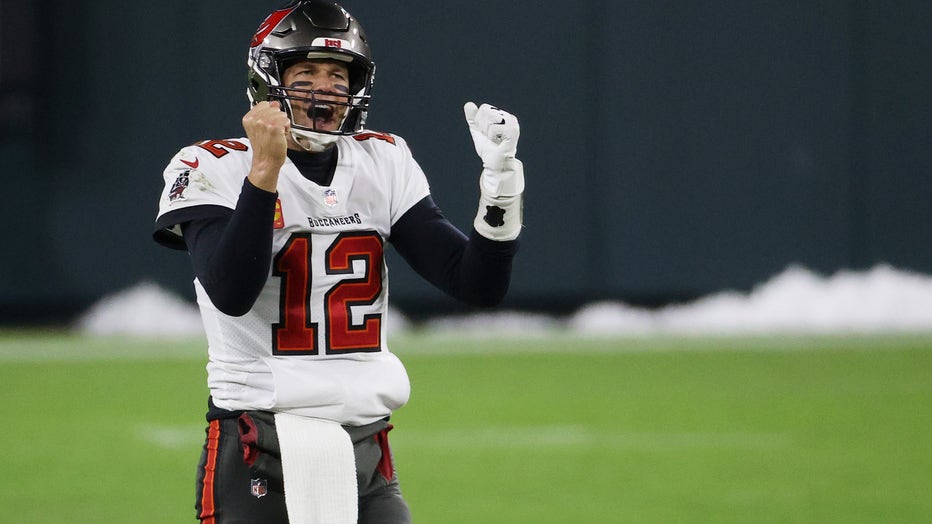 GREEN BAY, WISCONSIN - JANUARY 24: Tom Brady #12 of the Tampa Bay Buccaneers celebrates in the final seconds of their 31 to 26 win over the Green Bay Packers during the NFC Championship game at Lambeau Field on January 24, 2021 in Green Bay, Wisconsi

Brady is back in his first year at Tampa Bay after reaching this stage nine times with the New England Patriots. He went 20 of 36 for 286 yards and three touchdowns, but also threw three interceptions as Tampa Bay squandered most of an 18-point lead. Shaquil Barrett and Jason Pierre-Paul combined for five sacks to help the Bucs hang on for their franchise-record eighth consecutive road victory.

The Bucs snapped Green Bay’s seven-game winning streak. They were aided by a strange decision from Packers coach Matt LaFleur with just over two minutes remaining in a 31-23 game.

After three straight incompletions had the Packers facing fourth-and-goal from the 8, the Packers elected to kick a field goal to get within five. Tampa Bay then ran out the clock on the Packers (14-4).

Rodgers went 33 of 48 for 346 yards with three touchdowns and one interception, but fell to 1-4 in conference championship games as a starting quarterback. The Packers had the NFL’s best red-zone offense this season, but they twice settled for field goals after having a first-and-goal Sunday.

The reigning Super Bowl MVP finished with 325 yards passing and three touchdowns, most of it to favorite playmakers Travis Kelce and Tyreek Hill, who complemented their star quarterback with a record-setting night of their own.

The Chiefs will face a familiar foe — Tom Brady — and the NFC champ Buccaneers in two weeks in Tampa, Florida.

Kelce finished with 13 catches for 118 yards and two touchdowns, and Hill added nine catches for 172 yards, becoming the first duo in NFL history with consecutive games of at least 100 yards receiving each in a single postseason.

Clyde Edwards-Helaire and Darrel Williams added short TD runs for the Chiefs, who will try to become the eighth franchise and first team since the Brady-led New England Patriots in 2003 and ’04 to defend the Lombardi Trophy.

Allen, who had his worst game of the season in a Week 6 loss to the Chiefs, again struggled against the blitzing Kansas City defense. He finished with 287 yards passing with two touchdowns and an interception, but a big chunk of his numbers came as the Bills tried to rally from a 38-15 deficit in the final minutes.