"I’ve always been impressed with his skill set and I think his style fits our style of play," coach Juwan Howard said.

Looking shaky without Jones, Michigan committed nine turnovers in the first 12 1/2 minutes and trailed 28-13. Out of options, Howard called on Collins, who averaged less than 10 minutes per game, to turn things around. He went 6 of 7 from the field, produced season bests in points and rebounds and had just one turnover in 31 minutes. 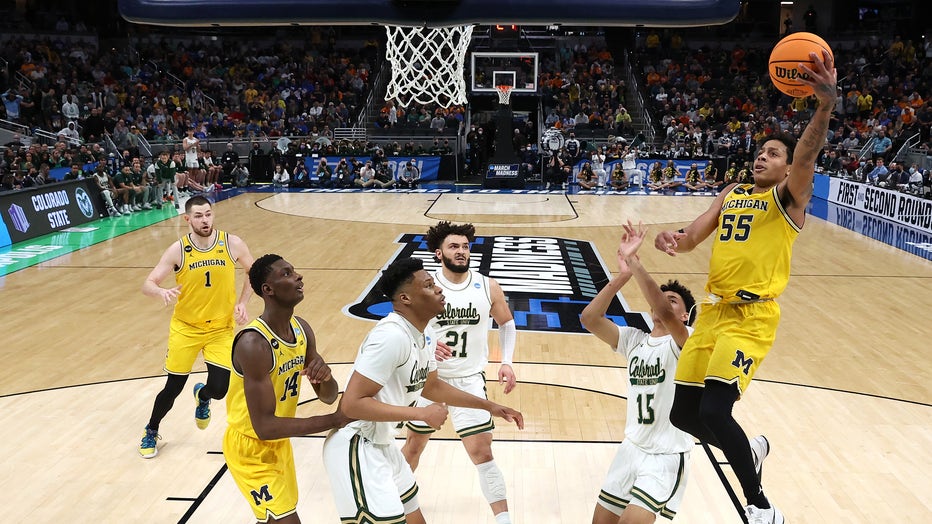 INDIANAPOLIS, INDIANA - MARCH 17: Eli Brooks #55 of the Michigan Wolverines attempts a layup against the Colorado State Rams during the second half in the first round game of the 2022 NCAA Men's Basketball Tournament at Gainbridge Fieldhouse on March

"They just told me to be Frankie and I felt great going into the game," Collins said. "It’s just basketball. I’ve been practicing and playing basketball my whole life, so it’s just going out there doing the things I’ve been working on my whole life."

After reaching last year's regional semifinals, the Wolverines squeaked into this year's tournament thanks largely to their stout schedule. Howard was suspended for the final five regular-season games for hitting a Wisconsin assistant in the face during a postgame handshake line, and Michigan hasn't won two straight games in more than a month.

Dischon Thomas scored 15 points on 5-of-7 3-point shooting for Colorado State (25-6), and Mountain West Conference player of the year David Roddy had 13 points and six rebounds.

But the Rams could not take advantage of the highest seed in school history, the momentum from nine wins in their previous 11 games or the big, early lead.

"Disappointed, obviously," Rams coach Niko Medved said. "I thought the game was in the balance. We had our chances. Michigan was the better team today, clearly in the second half."

Collins had the biggest impact.

He scored seven straight to cut the 15-point deficit to eight and helped Michigan close within 36-29 at the half.

Collins continued the charge early in the second half, capping a 6-0 spurt with a steal and dunk to make it 38-35. And when Caleb Houstan made back-to-back 3s midway through the half, Michigan led 53-49.

The Wolverines never trailed again, closing it out at the free-throw line.

Michigan: A year ago, the Wolverines won the Big Ten regular-season crown and came within one win of reaching the Final Four. Most of those players opted to return to chase Michigan's second national title. After teetering early, the Wolverines gave themselves a chance — especially if Jones returns this weekend.

Colorado State: The Rams had all five starters return from last season's third-place NIT squad. They're not likely to be as fortunate next fall. While this was likely Medved's best coaching job, it wasn't the way the Rams anticipated heading home.

Michigan: Eli Brooks had 16 points, seven rebounds and six assists. .. Houstan scored 13 points. ... The Wolverines had a 36-25 rebounding advantage and outscored Colorado State 34-16 in the paint.

Colorado State: James Moore had 10 points. ... Isaiah Stevens had eight points and four assists before fouling out. ... The Rams were 12 of 35 on 3s but went 4 of 15 in the second half when they shot 29% from the field. ... Colorado State finished the season with two straight losses.

Colorado State: Will use this offseason to regroup and reload.