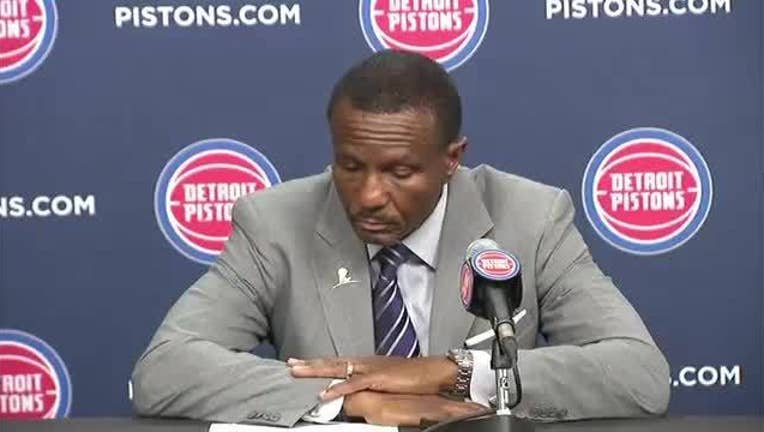 All game long, Mitchell heard a persistent heckler in the Utah crowd.

"That loud kid on the sideline. It was really his fault," Mitchell said after scoring 28 points to propel the Jazz to a 100-94 victory over the Detroit Pistons. "I don't know why people like that have to keep talking. I just had to shut him down."

Kyle Korver had 19 points, including five 3-pointers, to help the Jazz win for the sixth time in seven games. Mitchell has poured in at least 26 points in six consecutive games, the best such stretch of his career.

Rudy Gobert tied a career high with 25 rebounds and made things difficult for the Pistons, who shot 30 percent in the second half.

"It starts with defense. Just making sure we get a stop. I was able to be there at the right time, right moment," said Gobert, who finished with 18 points and two blocks. "I knew I had one of the best, if not the best, rebounders in the league (Andre Drummond) to box out. It made me a little more aware of that and a little more aggressive."

Mitchell was 1 for 7 over a 14-minute span of the third and fourth quarters and looked worn down. But the second-year guard made a scintillating drive and three-point play with 48.9 seconds to go for a 95-89 Utah lead.

The Pistons hounded Mitchell full court and forced him to spend a lot of energy throughout the game just to receive the ball and get to his spots.

"They were blitzing him tonight, but it all starts with him for our team and he came up big," Korver said.

Joe Ingles, who had 13 points, shut the door on the Pistons by hitting a 3 with 24.2 seconds left that made it 98-91. As the ball went through the hoop, he turned around and blew a kiss to the outnumbered fan.

Utah has won five straight against the Pistons and 23 of 27 in the series.

Blake Griffin scored 19 points and Drummond contributed 15 points and 13 rebounds for Detroit, which has lost five of six overall. The Pistons, one of the NBA's best offensive rebounding teams, had only five second-chance points.

"With everybody out, we needed to be great with where we're good. Obviously tonight Rudy was great on the boards and took his matchup seriously," Korver said.

After the Jazz trailed for most of the game, Derrick Favors capped a 13-0 run with a follow dunk to give Utah a 66-62 lead. But the Pistons surged back in front and led 82-78 on Reggie Jackson's floater in the lane.

The Pistons led by 12 in the first half despite sending the Jazz to the foul line 24 times and attempting only six free throws themselves. Detroit forced 10 turnovers that led to 16 points and had a 59-53 at the break.

For the third straight game, Utah played without a true point guard. Ricky Rubio (hamstring), Dante Exum (ankle) and Raul Neto (groin) were out with injuries.

Partly because of that, the Jazz found themselves in unfamiliar positions and driving lanes, often up against the shot clock. Detroit's defense produced 18 turnovers by cutting off paths to the hoop and picking off desperate passes.

Pistons: Griffin missed his first six 3-point attempts but made a four-point play in the fourth quarter. ... Drummond got a technical foul with 3:11 left in the fourth, but Mitchell missed the free throw. ... Detroit went 11 for 36 from the 3-point line after a fast start.

Jazz: Ingles left the court with 1:26 left in the first half due to a sprained ankle but returned in the second half. ... The Jazz outrebounded the Pistons 55-38. ... Utah has won its last five games when trailing at halftime. "It shouldn't take us a half to figure it out," Mitchell said.

Utah shot 36 free throws to Detroit's 16 - and the Pistons noticed.

"The thing that hurt worst was the free throw disparity. It's tough to beat somebody when you give them 20 more free throws," said Griffin, who took only two foul shots.

Detroit coach Dwane Casey added: "I saw fight. I saw intensity. I saw a disposition that was here to win. But it's disheartening when you see the disparity in the free throws."

ISH IS THE SPIRIT

Ish Smith, who missed 19 games with a torn adductor muscle, returned to the court and his coach couldn't have been happier. Smith scored eight points and the Pistons outscored the Jazz by six when he was on the court.

"Ish is our spirit. ... He is the speed of our team. He gets the tempo and pace going," Casey said before the game. "He always has a smile on his face and enjoys playing the game."

In the 19 games Smith missed, the Pistons were 5-14 and their efficiency and shooting percentage dropped precipitously.