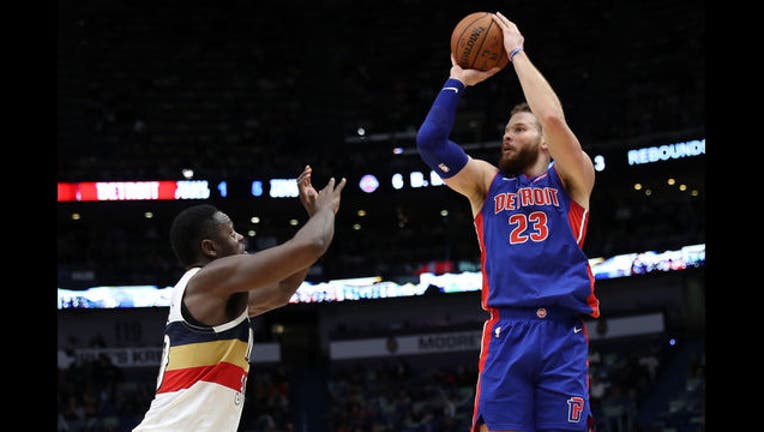 NEW ORLEANS (AP) - Blake Griffin got Detroit off to a hot start, but the Pistons still had to scratch out a victory in the final seconds over the Anthony Davis-less Pelicans.

It didn't sit well with the All-Star forward.

"The way we finished the game was the reason we've lost so many close games," said Griffin, referring to Detroit's 95-87 lead with 1:32 left that nearly evaporated down the stretch. "This time we just happened to come out on top. We got a lucky miss, a lucky bounce and we were able to get a wide-open dunk, but this doesn't feel like that good of a win. Obviously, we'll take it, but stuff like this is why we've lost so many games."

Griffin scored 20 of his game-high 37 points in the fourth quarter of Detroit's 98-94 win over New Orleans, which was playing its second straight game without Davis.

Reggie Jackson added 17 points for the Pistons, who had lost seven of their previous 10.

Jrue Holiday scored 29 points and Jahlil Okafor added 17 for the Pelicans, who have lost four of six.

New Orleans cut the deficit to 95-92 on a drive by Holiday and a 3-poitner by Darius Miller with 52.5 seconds left.

The Pistons then had a sluggish possession, finally getting the ball in Griffin's hands for a forced 3-point attempt. When he missed, the Pelicans had a chance to tie, but Frank Jackson's open 3-pointer missed, and Holiday tapped the rebound out to the top of the key.

Reggie Bullock ran down the loose ball and dribbled 60 feet unguarded for a clinching dunk with 14.5 seconds left.

Griffin finished 14 of 28 from the field, including 4 of 9 on 3-pointers, and had nine rebounds and seven assists.

"He's carrying us, handling the basketball, making good decisions, just doing everything we could ask a franchise player to do," coach Dwane Casey said. "He's been great. He sets the tone for us offensively. He'd probably have more assists if we knocked down more shots."

Detroit went 7 of 23 from the field in the fourth quarter, scoring just 19 points in the frame.

"You want to finish perfect, and I'm striving for perfection and good habits," Casey said.

Playing without Davis, the Pelicans shot just nine free throws and made only four.

"We just struggled the whole night," New Orleans coach Alvin Gentry said. "At the end, we make a push back. You've got to be able to make the game-winning plays, as we call them. We didn't do that. We have failed to find consistency throughout what we're trying to do. That's a lot on me. As a coach, you've got to figure out a way to have your team play consistently and you've got to find out who is willing to do that. We're kind of still searching for that."

"We just kept feeding him," said Jon Leuer, who had 11 points and six rebounds. "When he's in a rhythm like that, he's unstoppable."

Pistons: Casey said C Andre Drummond, who sustained a concussion in a Jan. 18 win over Miami, felt "spry and full of energy" in shootaround, but he still missed his third consecutive game.

Pelicans: Davis missed his second straight game with a fracture of his left index finger. He may miss another one to two weeks.

Pistons: Will end a three-game trip at Dallas on Thursday night.

Pelicans: Visit Oklahoma City on Thursday night. The Pelicans have 10 games left in a monthlong stretch in which they have a flight between each of 16 games.