DETROIT - Aleksi Heponiemi made the most of his NHL debut, scoring with 2:15 left in overtime to lift the Florida Panthers to a 3-2 win over the Detroit Red Wings on Saturday night.

Heponiemi scored from the left side of the net after Anthony Duclair lifted the puck over an opponent's stick and across the crease to set up the game-winner. Seconds earlier, Duclair was stopped on a breakaway. 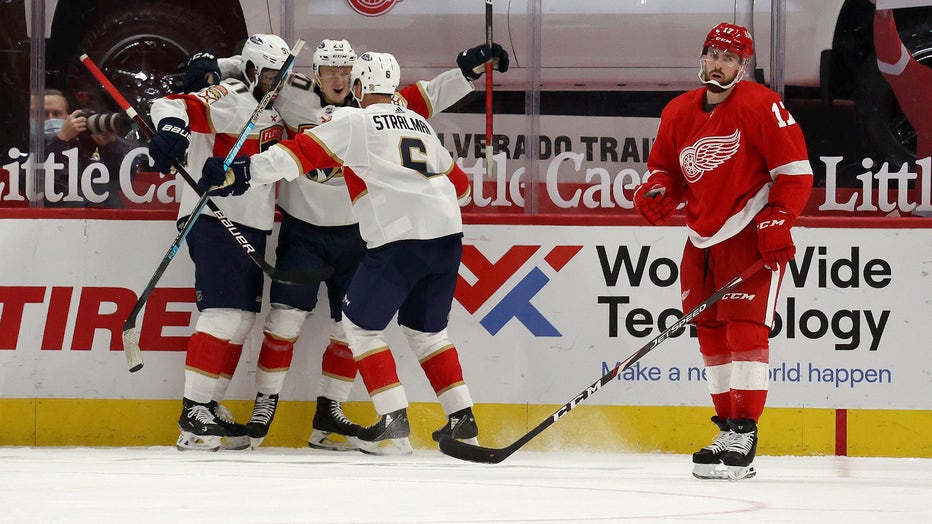 DETROIT, MICHIGAN - JANUARY 30: Aleksi Heponiemi #20 of the Florida Panthers celebrates his overtime winning goal with teammates next to Filip Hronek #17 of the Detroit Red Wings at Little Caesars Arena on January 30, 2021 in Detroit, Michigan. (Phot

Florida’s Sergei Bobrovsky made 25 saves, including one with his left skate late in the third period to stop Mathias Brome’s backhander.

Aleksander Barkov scored the Panthers' first of two goals on power plays 3:06 into the opening period, putting them ahead 1-0.

Anthony Mantha and Tyler Bertuzzi had goals 1:57 apart late in the first to give Detroit a 2-1 lead that didn't last long.

Florida's Keith Yandle tied it with 1 second left in the first period, leading to Detroit coach Jeff Blashill shaking his head from side to side as he walked off the bench and toward the team's dressing room.

The Panthers were coming off a shootout loss after opening their postponed-filled season with three straight wins.

Thomas Greiss stopped 23 shots for the Red Wings, extending his winless start with the team. They returned home after a winless, four-game road trip after splitting their season-opening, four-game homestand.

Bertuzzi, who has a team-high five goals, was unable to finish the game because of an upper-body injury after being on the ice for nearly 16 minutes. Due to the NHL’s COVID-19 protocols, Detroit was without five players: Adam Erne, Robby Fabbri, Sam Gagner, Jon Merrill and Filip Zadina.

The Panthers put defenseman Gustav Forsling on injured reserve. Florida, which had two series canceled because of COVID-19 issues with the other teams, did not have anyone on the list the league provides on a daily basis.

Barkov tied Scott Mellanby for No. 2 on the team's career list with 157 goals. He scored on a power play for the 44th time in his career, pulling into a tie with Pavel Bure for fourth on the franchise's all-time list.

IN CASE YOU MISSED IT

The same two teams will meet in Detroit on Sunday, roughly about 17 hours after leaving Little Caesars Arena.