Kyle Lowry scored 21 points and Gabe Vincent finished with 15 for the Heat. 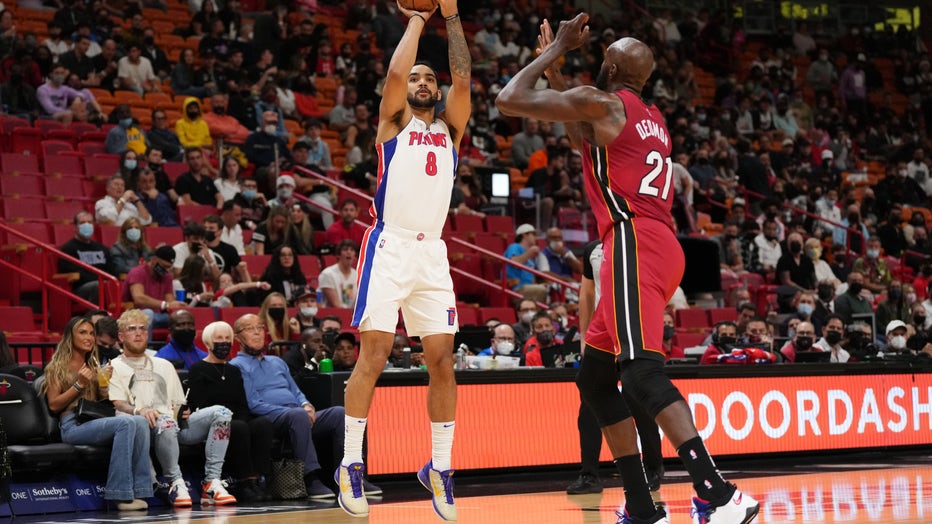 MIAMI, FLORIDA - DECEMBER 23: Trey Lyles #8 of the Detroit Pistons shoots the ball against Dewayne Dedmon #21 of the Miami Heat during the first half at FTX Arena on December 23, 2021 in Miami, Florida. NOTE TO USER: User expressly acknowledges and a

The Heat scored seven unanswered points and went ahead 112-110 on a 3-pointer by Herro with 1:12 remaining.

Bey’s jumper with 59 seconds tied it at 112-all before Strus' winner.

The Pistons hit a season-high 18 3-pointers.

Miami center Dewayne Dedmon sprained his left knee on a missed short jumper 5:19 into the first quarter and didn’t return. Dedmon’s absence resulted in the eighth appearance of the season by Haslem. The 41-year-old Haslem scored seven points and had five rebounds in 12 minutes.

Heat: Since joining the starting rotation, Vincent has scored in double figures in five of seven games. ... F P.J. Tucker (left leg inflammation) sat out his second straight game. ... Miami shot 12 of 32 from 3-point range, ending a streak of seven games converting 13 or more from beyond the arc.

Both clubs used the hardship rule and signed G League players to 10-day contracts as they deal with reduced rosters because of protocols. The Pistons signed forward Cheick Diallo, while the Heat added forward Zylan Cheatham. A four-year NBA veteran, Diallo averaged 14 points in 13 games with the Motor City Cruise this season. Cheatham joined the Heat from the Birmingham Squadron.