DETROIT - DETROIT (AP) — Jalen Hurts accounted for 333 yards and a touchdown and A.J. Brown had a career-high-tying 155 yards receiving in his Philadelphia debut, helping the Eagles hold on for a 38-35 win over the Detroit Lions on Sunday.

The Eagles scored 24 points in the second quarter and had a 17-point lead in the fourth that was cut to three when Jared Goff threw a 22-yard touchdown pass to DJ Chark with 3:51 left.

Philadelphia sealed the win with Miles Sanders’ 24-yard run on third-and-2 from the Eagles 27 just before the two-minute warning and Hurts’ sneak that converted a fourth-and-1 from the Detroit 40 with 50 seconds left.

Sanders finished with 96 yards rushing and was one of three Philadelphia running backs to score. 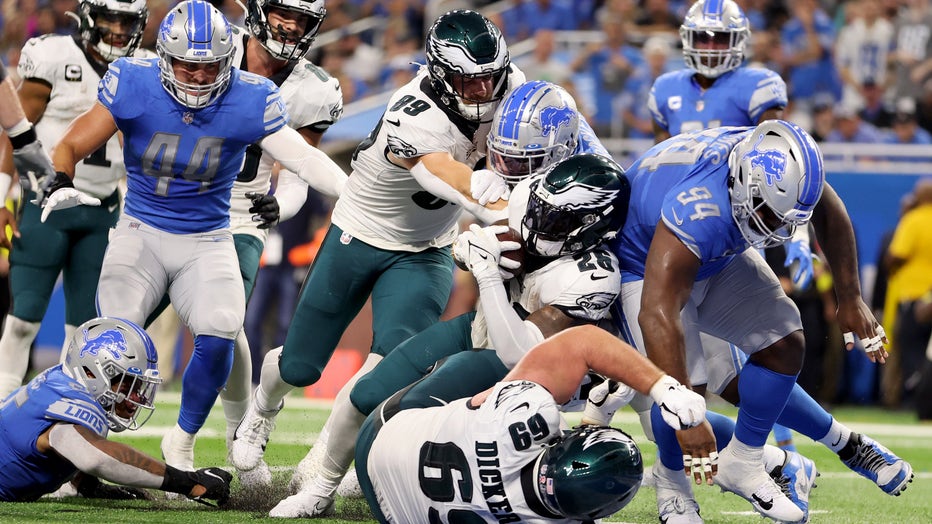 DETROIT, MICHIGAN - SEPTEMBER 11: Miles Sanders #26 of the Philadelphia Eagles scores a touchdown during the second quarter against the Detroit Lions at Ford Field on September 11, 2022 in Detroit, Michigan. (Photo by Gregory Shamus/Getty Images)

The Lions started strong, opening the game with a nine-play, 75-yard touchdown drive and forcing Philadelphia to turn it over on downs.

Hurts, though, proved to be too tough to stop on the ground and through the air.

He ran 17 times, one short of his career high, for 90 yards and a 1-yard touchdown early in the second quarter. The third-year quarterback was 18 of 32 for 243 yards, including a 54-yard pass to Brown that set up Jake Elliott’s 23-yard field goal that gave Philadelphia a 24-14 lead at halftime.

Brown made a quick return on the team’s investment. The Eagles traded the No. 18 pick and a third-round choice to Tennessee for Brown and signed him to a four-year contract worth at least $57 million.

Goff, who was inconsistent, was 21 of 37 for 215 yards with two touchdowns and an interception that James Bradberry returned 27 yards for a score that put the Eagles ahead 21-7 in the second quarter.

Detroit’s D’Andre Swift, who is from Philadelphia, had a career-high 144 yards rushing and a touchdown on 15 carries.

Lions defensive back Tracy Walker was ejected for swiping in a scrum with the Eagles after hitting Hurts near his head as he went to the turf late in the third quarter. When Walker hit Hurts above the shoulders after he went down on a run into Detroit territory, Philadelphia players came to their quarterback’s defense. Walker responded by swiping at tight end Dallas Goedert’s helmet and that ended his game.

Eagles: DE Derek Barnett limped off the field in the third quarter and was evaluated in a tent behind the sideline.

Lions: DT Levi Onwuzurike (back) went on injured reserve, hurting the depth where the team can’t afford to lose players.