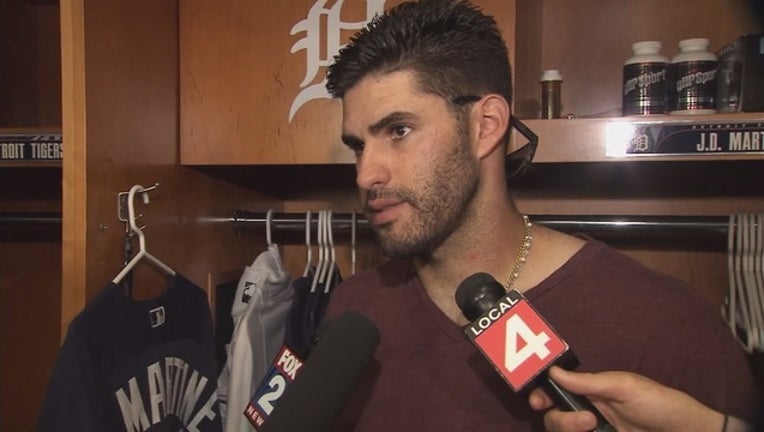 ANAHEIM, Calif. (AP) - For the first time since last September, J.D. Martinez stepped on home plate, smacked his chest a few times with his right hand and then looked up, pointing to the sky.

A few innings later, he got to celebrate all over again - a welcome sight for his Detroit Tigers.

Martinez powered up in just his second game of the season, hitting his second homer of the game in the ninth inning to lift the Tigers over the Los Angeles Angels 4-3 on Saturday night.

"I still feel like I'm just trying to feel it out," Martinez said. "It was just one of those things where I ran into a couple of balls today."

Martinez opened the ninth with a solo shot off Bud Norris (1-2) to snap a 3-3 tie. He came off the disabled list Friday after missing the Tigers' first 33 games with a sprained right foot.

"You can tell how much we missed him based on this one game," Tigers manager Brad Ausmus said.

Martinez opened the scoring in the second inning, following Victor Martinez's single with a two-run homer off Ricky Nolasco.

"I'm just happy I can contribute to the win today," he said. "I've been down there just watching the team, wishing I could do something. It was one of those frustrating things."

Martinez said his foot still hurts and expects it will all season.

"It's something I already have in my mind," he said. "The doctor said it's normal. He said I'm not going to do anything wrong to it. You want it to feel better, you have to rest it. We have a season to play, so you don't have time to rest."

Alex Wilson (1-1) pitched the eighth and got the win. Justin Wilson struck out three in the ninth for his second save.

Justin Upton hit a solo home run in the sixth for his eighth of the season and a 3-2 lead.

The Angels tied it in the seventh when Mike Trout crushed a solo home run off Shane Greene for his 10th of the year.

"He's not quite where he wants to be, and at times when he's not making his pitches, he's paying the price for it," Angels manager Mike Scioscia said.

Angels: C.J. Cron (left foot bruise) started his fourth rehab game for Triple-A Salt Lake, Scioscia was uncertain how many additional games he would play before rejoining the Angels. He is 5 for 12 with a home run.

Angels third baseman Yunel Escobar left after the fifth when he felt a hamstring tighten up. Scioscia called him day to day, which makes him unlikely for Sunday's quick turnaround for an afternoon game. Scioscia said Cliff Pennington, Jefry Marte or Luis Valbuena could play third.

Angels: Right-hander Alex Meyer is scheduled to make his fourth start of the season. Meyer (1-1, 7.62 ERA) has struggled with his command, walking 12 and allowing 14 hits in his 13 innings.