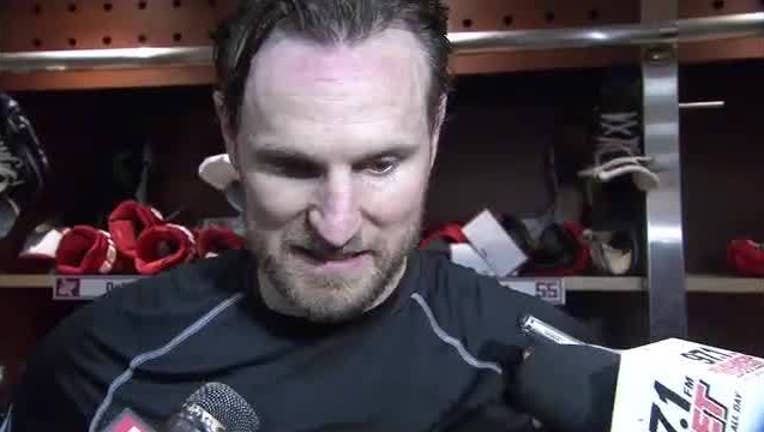 RALEIGH, N.C. (AP) - Badly outshot over the first two periods, the Detroit Red Wings still managed to have the lead and went on to another win.

Niklas Kronwall had a goal and an assist, Jonathan Bernier stopped 38 shots and the Red Wings beat the Carolina Hurricanes 4-1 on Thursday night.

"They came out hard to start, and we knew they would," center Dylan Larkin said. "But we stayed patient, capitalized on our chances, and we played our best hockey in the third period."

Bernier had 14 saves in the first and 12 each in the second and third periods.

"I thought I was there when they needed me, especially in the first, to weather the storm," said Bernier, who denied Carolina's top goal-scorer, Sebastian Aho, on an early breakaway.

Nielsen gave the Red Wings a 2-1 lead as he tipped Nick Jensen's shot past Mrazek with 7:41 left in the second period. It came on Detroit's 1th shot on goal of the game.

Carolina had a 27-13 advantage on shots on goal through 40 minutes.

Ericsson scored at 3:58 of the third on a wrist shot off the leg of Carolina's Trevor van Riemsdyk to give Detroit a two-goal margin.

Andrei Svechnikov scored for Carolina and Petr Mrazek finished with 20 saves against his former team.

"We can't be sitting here relying on an 18-year-old to get it done," Hurricanes coach Rod Brind'Amour said.

A Carolina shot with 5:35 left rolled off a skate and past Bernier, but Filip Hronek swept it off the goal line, and Detroit retained its 3-1 margin.

"So many guys stepped up tonight, and it started with 'Bernie'," Larkin said. "He was solid all night."

Kronwall scored for Detroit on its first power play with 8:10 left in the first. Jordan Martinook failed to clear the zone after the puck caromed off the boards, and Kronwall gathered the puck and fired past Mrazek unassisted for his second of the season.

"We're just inches away from doing the right thing all the time," Martinook said.

Svechnikov scored his 10th of the season 90 seconds into the second to tie the score. Detroit challenged the goal because it thought Lucas Wallmark was offsides, but Svechnikov's fourth goal in four games stood.

Carolina's Jordan Staal, in his first game since Dec. 5 after being sidelined with a concussion, hit the post on a short-handed breakaway chance. Thirty seconds later, Detroit took the lead.