Bob Wojnowski and Will Burchfield are in the house for week one of the NFL. Talking plenty of Lions, but there's also college football and Tigers to get into as well.

DETROIT (AP) - A year later, the Detroit Lions are in exactly the same spot.

The question is whether they can improve their response in 2022.

Last season’s close call against the Niners was the beginning of an 0-10-1 start for the Lions, who finished the season 3-13-1. Coach Dan Campbell’s job is to improve upon that record. 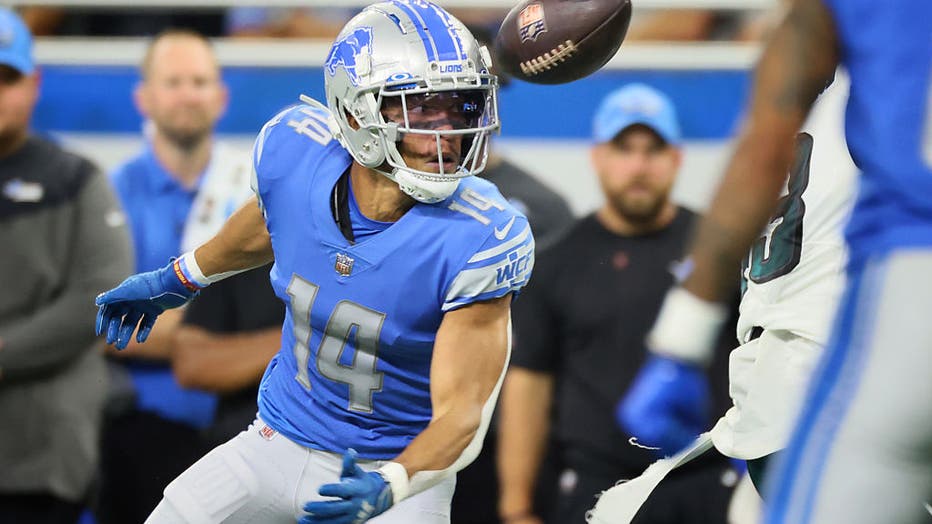 Wide receiver Amon-Ra St. Brown (14) of the Detroit Lions attempts to catch the ball during an NFL football game between the Detroit Lions and the Philadelphia Eagles in Detroit, Michigan USA, on Sunday, September 11, 2022. (Photo by Amy Lemus/NurPho

"We have to clean this up."

Two of the biggest mistakes were personal fouls that extended Philadelphia touchdown drives. In the third quarter, linebacker Alex Anzalone roughed Eagles quarterback Jalen Hurts on a running play, adding 15 yards to a 24-yard gain for Philadelphia. In the fourth, safety Tracy Walker hit Hurts in the head on a slide before getting thrown out for another personal foul during the ensuing melee.

"I didn’t see the hits, but Tracy got thrown out for a second penalty, which is completely unacceptable," Campbell said. "He knows the situation, and that things like that are what get you beat."

It isn’t surprising the Lions were frustrated by Hurts, who threw for 243 yards and rushed for 90 more. He also scored one of Philadelphia’s four rushing touchdowns.

"There’s no excuse for letting him hurt us that badly," Campbell said. "But it is tough to face that kid when you haven’t seen anyone else like him. If you take away his rushing yards, we weren’t bad, but that’s what he put on us. We have to fix it."

The Lions finished with 386 yards and 35 points, but the offense bore a big share of responsibility for the loss. Jared Goff threw a pick-6 in the second quarter and struggled to hit receivers until the later stages of the game.

"We should have scored 50 points today, and that’s against a really good defense," Goff said. "We just shot ourselves in the foot all day."

Even D’Andre Swift, the unquestioned star of the day with 175 combined yards on 18 touches, felt like he should have done more.

"The offensive line was phenomenal in front of me, and once I got to the second level, our receivers were phenomenal with their downfield blocks," he said. "They had me in a lot of spots where I only needed one guy to miss and I didn’t do it.

"I’m going to have to watch the film, but I know we left a lot on the field. That’s why we’re taking a loss home with us."

The Lions had no significant injuries. Cornerback Jeff Okudah missed some time late in the first half, but Campbell said Okudah got a series off to limit his snap count after two years of injuries.

Walker had the team’s only sack, knocked down a pass behind the line of scrimmage and had a tackle for a loss. However, his ejection meant he was off the field when the Eagles ran out the final 3:49 with a three-point lead.

"I let my team down," he said. "As a captain, I have to be better. I was hot-headed at the moment and I’ve just got to make better decisions."

DE Aidan Hutchinson, the second overall pick in this spring’s draft, had a quiet debut. He missed a chance to bring down Miles Sanders for a loss on 3rd-and-2 with 2:21 to play. Sanders ended up gaining 24 yards and ran out the clock.

"He’ll be better next week," Campbell said. "He needed this, and that’s how it goes for most rookies. You get into your first real game at this level and it’s just a little different."