DETROIT - Brandon Lowe had a two-run home run among his three hits and drove in three runs as the Tampa Bay Rays beat the Detroit Tigers 7-2 Thursday night.

Randy Arozarena had four hits for Tampa Bay, which won back-to-back games for the first time since the All-Star break.

Rays starter Jeffrey Springs (4-3) picked up the win, allowing two unearned runs in six innings. He struck out six without walking a batter. 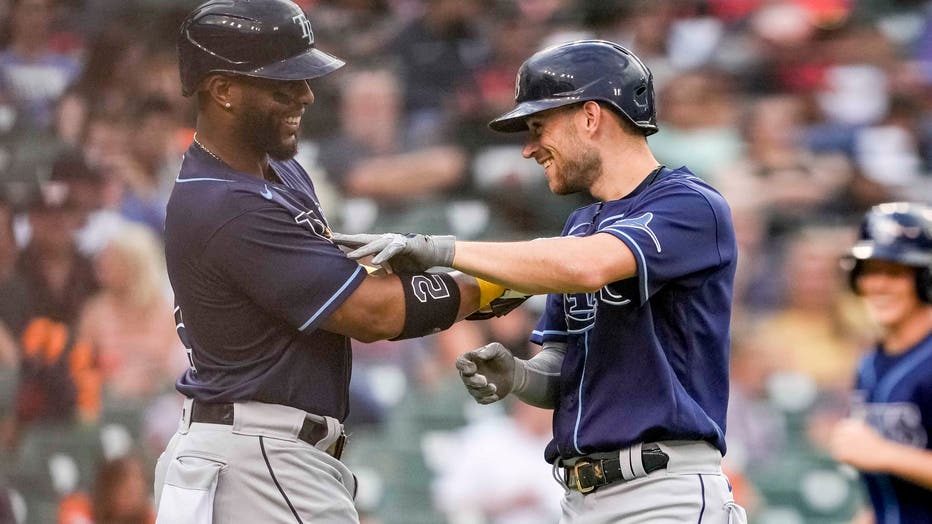 DETROIT, MICHIGAN - AUGUST 04: Brandon Lowe #8 of the Tampa Bay Rays celebrates with Yandy Diaz #2 after hitting a home run on a line drive to right field against the Detroit Tigers during the top of the third inning at Comerica Park on August 04, 20

The Rays took a 2-0 lead in the second on Lowe's blast before Tampa Bay gave Detroit plenty of help to tie the game in the bottom of the inning.

After Daz Cameron singled, third baseman Yandy Diaz misplayed back-to-back grounders, loading the bases. Riley Greene made it 2-1 with a sacrifice fly and Javy Baez tied the game with a single.

Baez's 16th error of the season extended the third inning, and Lowe took advantage with a two-out RBI single before Diaz scored on a wild pitch.

Tampa Bay nearly made it 5-2 in the sixth, but Tigers left fielder Victor Reyes reached over the wall to grab Christian Bethancourt long out.

Reliever Alex Lange retired the first hitter in the seventh, but a pair of walks and a wild pitch gave the Rays runners on second and third with one out. Arozarena's base hit gave the Rays a three-run lead.

The Rays claimed RHP Jimmy Yacabonis off waivers from the Miami Marlins, and will make a corresponding roster move when he arrives in Detroit. He was 1-1 with a 6.75 ERA in nine relief appearances with the Marlins this season.

The teams continue their four-game series on Friday, with Corey Kluber (7-6, 4.03) facing a yet-to-be-announced Tigers pitcher.