PARADISE ISLAND, Bahamas - Juwan Howard was standing at the center of his Michigan team posing for oncourt pictures when he finally grabbed the hefty Battle 4 Atlantis championship trophy from the table in front of him.

The first-year coach tipped it backward to peek at the front and the large seashell on its base, then used both hands to hoist it above his head with a celebratory scream.

“It’s gratifying to be able to hold up that trophy and say, you know what? All that sacrifice we put through, all the hard work we put in, it was well worth it,” Howard said.

There was no arguing with the results, either. His Wolverines again overwhelmed a highly ranked opponent with their flowing offense to beat No. 8 Gonzaga 82-64 in Friday’s title game. And that closed a three-game run that saw Michigan go from arriving in the Bahamas as an afterthought in an eight-team tournament featuring four AP Top 25 teams to commanding everyone’s attention.

“Well, I’m sure we’re on the map now,” Howard said with a big grin.

Jon Teske added 19 points, 15 rebounds and four blocks as the tournament’s most valuable player for the Wolverines (7-0).

Yet the story was more about the way Michigan won the title than any stats. The Wolverines handled Iowa State in Wednesday’s opener, then led No. 6 North Carolina by 24 at one point during Thursday’s win before beating the Zags (8-1). And that secured a pair of early marquee wins for Howard, the longtime NBA player and member of Michigan’s “Fab Five” a quarter-century ago.

This one had a similar feeling to the UNC win, too, with Michigan’s offense kicking into a hot-shooting gear midway through the second half to take control and build a huge lead.

“We’re having fun together,” Teske said. “We’re sharing the ball. We know where we’re going to be on the court at all times. 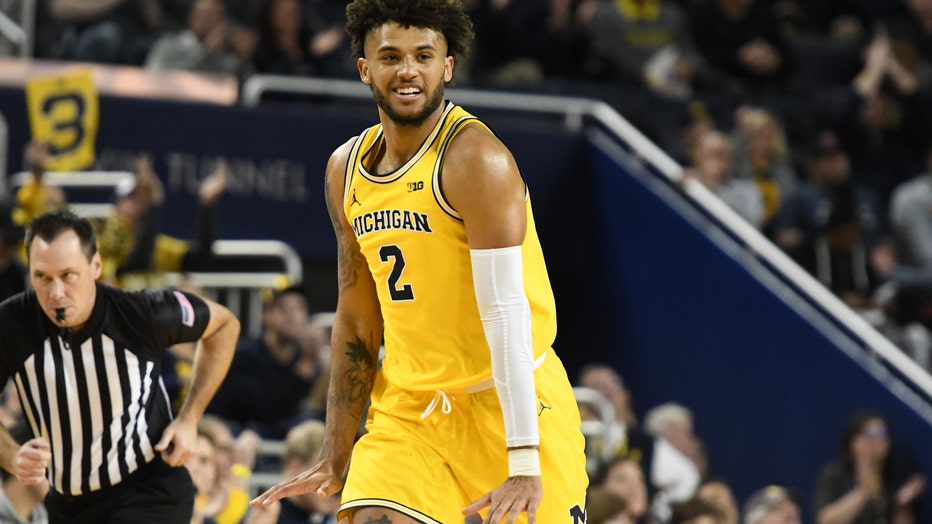 ANN ARBOR, MI - NOVEMBER 12: Isaiah Livers #2 of the Michigan Wolverines celebrates a shot during a basketball game against the Creighton Bluejays at the Crisler Center on November 12, 2019 in Ann Arbor, Michigan. (Photo by Mitchell Layton/Getty Imag

Michigan led just 38-36 when the shots started falling from just about everywhere: a 3-pointer from Zavier Simpson, two drives from freshman Franz Wagner, a 3 from Livers and two more from David DeJulius.

It was a burst of 10 straight scoring possessions - with Michigan moving the ball to get good looks on just about every one - that put the Wolverines up 62-43 by the midway through the second half.

Gonzaga never got the lead below double figures again.

Killian Tillie scored 20 points for the battered Bulldogs, who dealt with numerous injury concerns over the three-day tournament. Gonzaga just couldn’t keep up with the Wolverines and finished the game shooting 40%.

“Every time we made a mental breakdown, they scored,” Gonzaga coach Mark Few said. “They literally made us pay on every one of our assignments that we screwed up - a switch or we screwed up a coverage. And they made us pay, so they deserve a lot of credit for that.”

Michigan shot 54%, including 12 of 23 from 3-point range. And by the end, there was even the sight of Howard breaking out dance moves for his players as they held a sign proclaiming Michigan as the Atlantis champs.

“We work hard as a group,” Howard said. “Why not have some fun?”

Gonzaga: The Bulldogs fought through a semifinal win against No. 11 Oregon as their highlight of the Thanksgiving-week tournament. But Few would probably love to use the coming days to get healthy, with Tillie missing the opener as he continues playing his way back from an October knee surgery. Gonzaga again didn’t have Anton Watson because of an ankle injury.

“It’s going to be crucial the next couple of days to rest our bodies and just focus on that and get ready for the next game,” Tillie said. “But yeah, it was a tough three days for the team.”

Michigan: Howard took over for John Beilein and inherited a team that lost its top three scorers to leave uncertainty even with several experienced players returning. But the Wolverines shot 50% or better in every game, handled two top-10 teams with ease - and likely secured themselves a debut in next week’s latest AP Top 25 poll.

“We don’t really pay attention to all the media stuff,” Livers said as Howard nodded next to him. “We want to play Michigan basketball and that’s all we’re going to be focused on.”

Simpson had 13 points and tied his own Atlantis tournament record with 13 assists for Michigan. This time, however, he had just two turnovers compared to the eight he had when setting the record against Iowa State.

Michigan: The Wolverines visit No. 2 Louisville on Tuesday in the ACC/Big Ten Challenge in what has become a very big game on the national schedule.