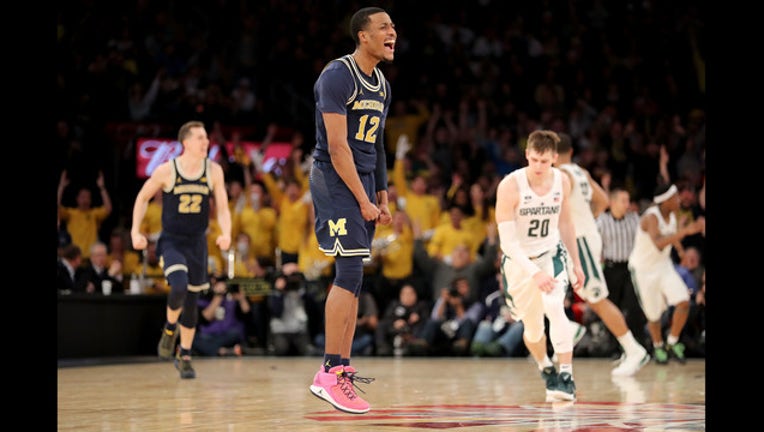 NEW YORK, NY - MARCH 03: Muhammad-Ali Abdur-Rahkman #12 of the Michigan Wolverines reacts in the second half against the Michigan State Spartans during semifinals of the Big 10 Basketball Tournament. (Photo by Abbie Parr/Getty Images)

Moe Wagner scored 14 of his 15 points after a dreadful first half and fifth-seeded Michigan moved within a game of its second straight Big Ten Tournament title with a 75-64 victory over top-seeded Michigan State on Saturday, ending the No. 2 ranked Spartans' 13-game winning streak.

Senior swingman Duncan Robinson said this year feels like 2017 when the Wolverines won the tournament as the No. 8 seed, the lowest seed to win the event.

"I think coming down the stretch in that championship game and how it felt, I think all the guys want that again more than anything," said Robinson, one of five players in double figures in the eighth straight win for Michigan (27-7). "We are one step closer, but we still have to stay locked in on the task at hand."

Michigan will play the winner of the second semifinal between third-seeded Purdue and seventh-seeded Penn State on Sunday as the five-day tournament ends at Madison Square Garden.

Muhammad-Ali Abdur-Rahkman and Zavier Simpson also had 15 for the No. 15 Wolverines, who were also the last team to beat Michigan State (29-4), when they did it on Jan. 13. Robinson added 13 points off the bench and Charles Matthews had 12.

Michigan was just too balanced and quick for Michigan State.

The difference was the second half. Wagner got going and the Wolverines lit up the Spartans' defense, hitting 12 of 18 from the field and making 20 of 27 free throws in the final 20 minutes.

Michigan coach John Beilein had a great motivational speech for Wagner, who was 0-for-7 from the field in first 20 minutes.

"Hey, Mo, are you going to make a shot?, Beilein recalled saying. "Because right now you're stinking the place up. Just make one shot."

Wagner, who finished 4 of 14 from the field, laughed when it was mentioned.

"Coach and I have a really good relationship," said Wagner, who stood in front of the Michigan fans after the game and repeated waived his arms to encourage the celebration. "He can say that. That's fine. He told me to pick it up a little bit and make plays."

Miles Bridges had 17 points to lead Michigan State before fouling out late. Jaren Jackson Jr. added 13 and Cassius Winston had 11, but the Spartans only crossed into double figures with the Michigan band revving the Maize and Blue faithful at Madison Square Garden with yet another version of "Hail To The Victors."

"Our mood is we're really mad, but like I said, we're not going to let it affect us in the future," Bridges said.

This was a rivalry game that both teams wanted and it showed in the opening minutes. There were two scrums after hard fouls, a technical foul was called against the Spartans' forward Nick Ward and referee Gene Steratore - yeah, the guy who led the officiating crew at the Super Bowl - lectured both Tom Izzo of Michigan State and Beilein after the nonsense. And that was just in the opening 4:24.

Wagner had three baskets and a free throw, with a drive to the hoop seemingly getting him going.

Michigan State would get within two points a couple of times and was within 50-47 when Bridges hit a 3-pointer with 8:28 to go. However, Abdur-Rahkman and Simpson sandwiched layups around a missed jumper by Bridges to ignite a 7-2 spurt that Robinson capped with two free throws for a 57-49 edge with 5:23 left.

Michigan State never got closer than five points the rest of the way.

Michigan State: Played well for roughly 20 minutes in two tournament games. "They've done the things they've needed to do over a long period of time," Izzo said. "And I'm going to keep that in mind, not panic over a loss when it's your rival."

Michigan: Play in the title game against either Purdue or Penn State.

Michigan State: Finds out who it is playing in the NCAA Tournament.