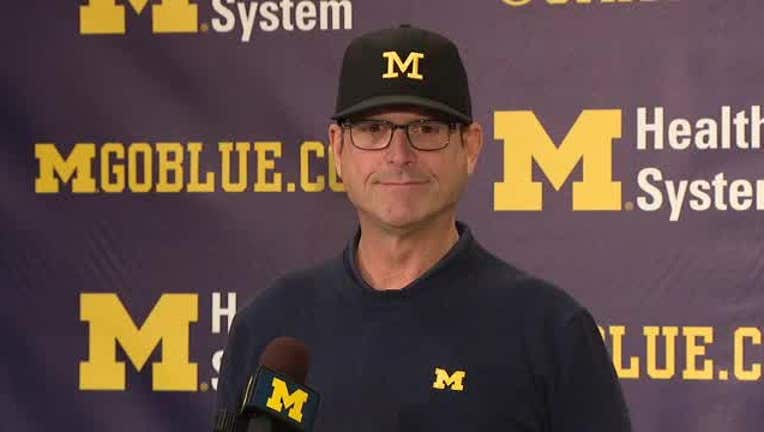 The self-doubt that comes with squeezing past Army in double-overtime and losing by three touchdowns to Wisconsin appears to have finally vanished for No. 14 Michigan.

Coach Jim Harbaugh was quite impressed with the numbers on the scoreboard last week, when the Wolverines thrashed then-No. 8 Notre Dame 45-14 . More notable, however, was the confidence Michigan displayed in recording its fifth-largest margin of victory over a top-10 team in school history.

"Probably the thing that stood out to me the most from the ballgame Saturday night was just how much unconditional belief our players had in each other and themselves," Harbaugh said. "It was like as high as I've ever seen it. They knew they would get their own job done and they knew the player next to them would get the job done."

"To a man, across the board. Starters and backups. Unconditionally," Harbaugh declared.

Before defeating Notre Dame, Michigan came up short on a comeback bid at Penn State. The Wolverines have won four of five and seem poised to go on a run at least until the regular season finale at home against rival Ohio State.

Michigan seems to have garnered momentum, though Harbaugh isn't sure if that's a tangible force in the college football world.

"Albert Einstein, I think he had a formula," he said. "I don't have a formula."

If reverse momentum is a thing, then Maryland has it.

After opening their first season under coach Michael Locksley with two straight victories, the Terrapins have dropped five of six - including a 52-10 drubbing last week at Minnesota.

Some other things to know about the Michigan-Maryland matchup on Saturday:

Most teams schedule a less-than-formidable foe for homecoming.

Maryland has Michigan, which certainly goes against the norm.

Problem is, the Terrapins has only two home games between Sept. 27 and Nov. 23. Maryland faced Indiana two weeks ago during the highly popular Family Weekend, so it's Michigan for homecoming, as decreed in a schedule devised by school officials long before Locksley's arrival.

"I'm not a guy that complains about it," Locksley said. "We're going to play whoever shows up on our schedule when it's scheduled to be played."

Michigan freshman Mike Sainristil was originally recruited out of Massachusetts to play defensive back, but moved to receiver after Harbaugh asked him which side of the ball he wanted to play on this season.

Sainristil, who fled Haiti with his family when he was 7 months old, made the most of his opportunity last week filling in for injured receiver Ronnie Bell.

He had three receptions for 73 yards and a touchdown against the Irish.

"Mike really made the most of his opportunity," Harbaugh said. "Those three catches made a big impact."

Maryland used three quarterbacks last week, and the healthiest of the trio will likely get the most playing time Saturday.

After missing two games with a high ankle sprain, Josh Jackson threw only two passes last week. He played tentatively and was yanked by Locksley.

Michigan offensive coordinator Josh Gattis may have been calling plays for Maryland if Harbaugh didn't hire him.

At Alabama, Locksley picked the plays during the game. Gattis insisted he was the one who drew up the offensive plan, and the two became involved in a war of words over the summer.

"There's a difference between suggestions and decisions, and he'll have an opportunity to make decisions now," Locksley said in August.

Harbaugh sent an email to parents of players on his team, refuting a report saying representatives are working on his departure from his alma mater.

Harbaugh said earlier this week the email was an example of keeping lines of communication open with parents.

"Always had a policy of that," he said. "It wasn't really for public consumption."